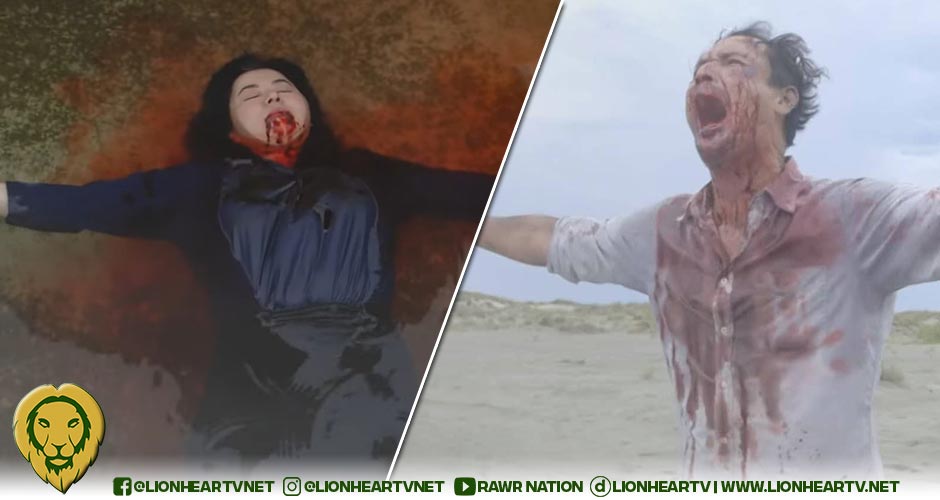 Alhough many understood the need for the latest episode to go extra-gory, there were viewers of the almost seven-year-old series, FPJ’s Ang Probinsyano, rendered shock and disbelief,

While many viewers welcomed the departure of both Estrada and Tolentino’s characters from the program, some viewers expressed concerns about the nature of their death scenes. Many described it as awfully graphic and not suitable for primetime viewing.

That said, pleased netizens still outweigh the disapproving viewers, with many applauding the showrunners, including Coco Martin, for pulling off the episode’s macabre scenes.

Rey Dominic Vladimir captured the polarizing sentiments of most viewers toward the scene via one of his tweets.

His tweet included a black and white screenshot of the scene where Armando’s both arms detached from his body.

“The most delicious moment in FPJAP’s history,” captioned John Marantal to his post that included a clip of Armando’s brutal death scene.

“To those who complained about how John Estrada died in FPJAP tonight. STFU. Didn’t y’all give a damn when he beat up and killed Jaime Fabregas, who was already old and weak and then they tortured him like how a kid got physically abused? You nincompoops,” he tweeted.

Twitter user @FumiDoggo agreed that the scene raised certain concerns, but he acknowledged it as as game changer.

“This is the certain episode that it got too far in the gore moment but it really was a game changer for viewers,” he wrote.

“I hope the seen today was properly approved by the MTRCB. The brutal death of Armando is like a scene I’ve watched on a movie “Wrong Turn”. P. S. : To all parents and guardians watching, SPG means strict parental guidance, just a reminder,” noted EJ Gonzales.

I hope the seen today was properly approved by the MTRCB. The brutal death of Armando is like a scene I've watched on a movie "Wrong Turn".

Like many viewers, @jronrecio seemingly believed that the brutal death scene was necessary to remind the viewers of the more nefarious and revolting acts Armando did, especially to Lolo Delfin.

“Karma has finally been served, the deserving brutal death scene of Armando Silang is for Gen. Delfin Borja’s justice!”

Netizens also expressed satisfaction with Lily Hidalgo’s fate, as her death was finally served in the hands of Cardo Dalisay, himself.

“Part of me be like: Kay Lily naman, excessive use of force. Nebeyen. Kaka trigger naman to hahahaha

Also me: Dasurv! “ tweeted @jei3m11, who had contrasting feelings for Lily’s demise.

“What a satisfying death for Lily. She deserves it!” said CephiroRare, adding to the growing list of viewers who seemed satisfied about the fate of Dalisay’s most wicked nemesis.

In an episode earlier in the series, Rosanna Roces’s character, Lolita Silang, also met a tragic ending. She got killed by a giant chandelier that fell straight onto her body and face.

Now on its last week on air, FPJ’s Ang Probinsyano races towards its historic finale on August 12. With John Arcilla and Raymond Bagatsing still prepping to confront Cardo Dalisay and Task Force Agila. What will the sensational TV series leave its audience still? Will it have its viewers glued to their gadgets and TV screens?