Mother nature appears to have a created replica of comic book superhero Spider-Man. 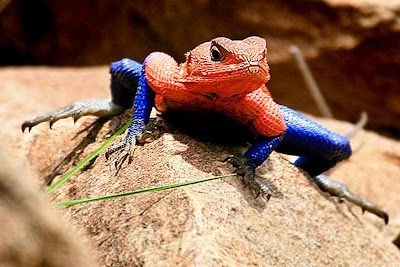 The Mwanza Flat Headed Agama lizard has distinctive red and blue markings that make it a dead ringer for the web-slinging superhero. Photographer Cassio Lopes snapped the super creature clinging to a rock in the Maasai Mara National Park, Kenya, in a pose almost identical to spidey’s famous crouch.

The lizards are native to Africa and live in groups with one dominant male — usually the most colourful. And just like the superhero’s secret alter-ego Peter Parker, this creature is extremely shy, vanishing as soon as the camera had snapped.

Cassio, 38, was looking out for leopards when he spotted the creature basking in the sun and grabbed his chance for a photo. He said: “I think this lizard was even more shy than Spider-Man himself. It must have brought us luck though because afterwards we managed to see the leopard we were looking for.”

The species’ popularity has rocketed since the comparison was noted, with exotic pet stores reportedly selling out of the lizards. But Spider-Man’s spidey-senses would be on full alert if he saw the amphibian. In the blockbuster “The Amazing Spider-Man” the hero will be battling against a 9ft lizard, Dr Curt Connors, played by Rhys Ifans.