PhilPop, the country’s premier songwriting competition, makes another huge comeback with an exemplary batch of music entries from the National Capital Region. 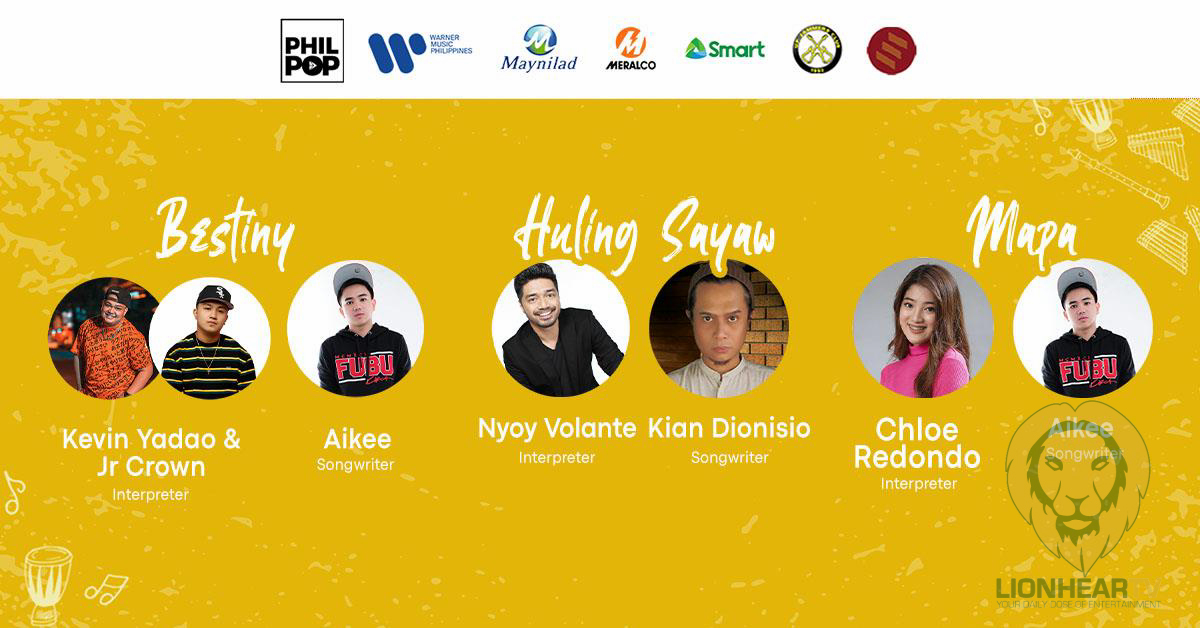 With a diverse showcase of sounds spanning R&B, contemporary pop and folk-influenced genres, the latest roster offers catchy, radio-friendly fodders that tackle romance, forgiveness, and regret with precision and sensitivity.

Produced byPhilPop and distributed by Warner Music Philippines, this Friday’s commendable picks include two compositions by Aikee namely “Mapa,” interpreted by Chloe Redondo and Aikee himself, and “Bestiny,” interpreted by Kevin Yadao and Jr. Crown. Composer Kian Dionisio rounds up the Metro Manila cluster with his compelling original “HulingSayaw,” interpreted by NyoyVolante.

Prolific rapper and singer-songwriter AikeeAplacadorsnags two entries at this year’s PhilPop 2020 finals round.

“Mapa” is Aikee’s tribute to the parents that served as guiding light in times of utmost difficulty and trouble. This time, the acclaimed composer recruits newcomer Chloe Redondo on the inspiring pop/R&B ballad.

Both songs channel Aikee’s pop and urban sensibilities, while harnessing his skill as a versatile songwriter with a knack for inescapable chorus and earwormy hooks.

Kian Dionisio pens a heartfelt anthem of regrets and what ifs in life on “HulingSayaw.” Delicately woven with lush keyboards and stripped-down arrangements, his song “HulingSayaw” was inspired by Dionisio’s music career and the frustrations that come with nurturing the process. “I’ve been told that I was a late bloomer, not brave enough, and not driven enough,” Dioniso shares. “knew from the very beginning that I am a dreamer. But as I age, I started regretting all the opportunities and time that could’ve been so productive. If only I had started so much earlier, maybe I’m already living THE DREAM right now. This is one of my biggest regrets in life and I tried to incorporate the idea to the song.”

Acoustic pop balladeer NyoyVolante interprets Dionisio’s melancholic piece with just the right amount of skill and restraint. Volante worked hand in hand with Dionisio in capturing the emotional frailty of the track, delivering it with his own touch while staying true to the original’s message.

“Bestiny,” “Mapa,” and “HulingSayaw” are now available on streaming and digital platforms worldwide via PhilPop and Warner Music Philippines.