LONDON/MANILA – CNN Philippines, the most trusted name in news in the Philippines announces the release of its first podcast, “Suddenly Family,” hosted by Emmy-winning journalist Samuel Burke. Inspired by three astonishing DNA results in his own life, Burke masterfully draws on his own experiences as he unravels the mysteries of over a dozen families around the world whose lives are unexpectedly turned upside down by DNA testing. 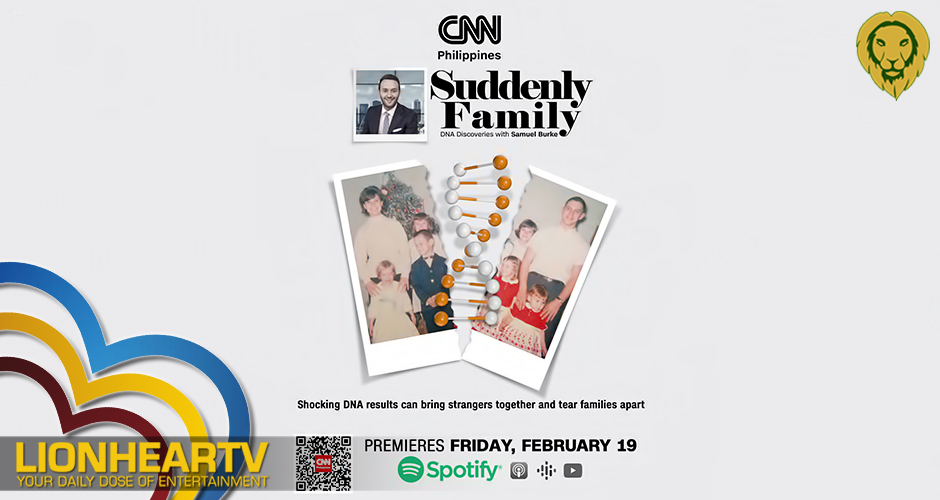 In 2019, Burke gifted his father a DNA test, only to discover they’re not related to the Burke family and that his small Jewish family is actually part of a large Mormon family. As he delved deeper into his family roots, Burke also learned his mother had a sister whom she had no knowledge of. And, astonishingly, Burke found out that a cousin who his family believed had died of AIDS, is actually alive.

“As a journalist, I’ve always lived to ask meaningful questions,” Burke says, “but I never dreamed I’d have to ask questions this intimate to my own family and to perfect strangers who have allowed me into the most earth-shattering moments of their lives.”

The inaugural episode launches on February 19 on all podcast platforms of CNN Philippines: Spotify, Apple, Google and YouTube. “Suddenly Family” delves into the unexpected and sometimes dark side of consumer DNA testing. New episodes will be available every week, for free through 2021. Link of the Suddenly Family podcast: http://bit.ly/SuddenlyFamilySpotify

For decades, DNA kits were used by the medical and legal communities to trace paternity, better understand genetic diseases, and as evidence in crime scenes. Now, the sky-rocketing popularity of these at-home kits is exposing ancestry and genealogy secrets for families across North America and Europe while it’s just begun to take off in Asia. Stunningly, 27% of mail-in DNA testing say they learned about close relatives they didn’t know about previously (Pew Research).

EPISODE 01: THE GIRL NEXT DOOR A woman who feels out of place in her own family has a DNA result that gives a whole new meaning to “the girl next door.”

EPISODE 02: FILIPINO FAMILY BOMBSHELL A man from Alabama holds the fate of a man from the Philippines in his hands.

EPISODE 05: A DECEASED MAN’S DNA ACCOUNT A DNA result from beyond the grave holds the secret of a lifetime for two women who’ve never met.

EPISODE 07: THE WOMAN WITH SIX PARENTS The incredible adoption story of Natasha Avery is unlike the journey of anyone else on the planet.

EPISODE 08: CAN SISTERS WEATHER A DNA STORM? A shocking genealogy result engulfs the relationship of two sisters standing on the edge of the DNA abyss.

EPISODE 09: DEAD TO ME The deaths of a baby girl and her mother shed light on America’s horrific “Baby Scoop Era.”

EPISODE 10: MY DEAD COUSIN The host of “Suddenly Family” discovers more dark family secrets while searching for answers to the disappearance of his missing loved one.