TUDUM! It’s the sound you hear every time you start watching your favorite show or movie, and now it’s coming to life in an epic way. 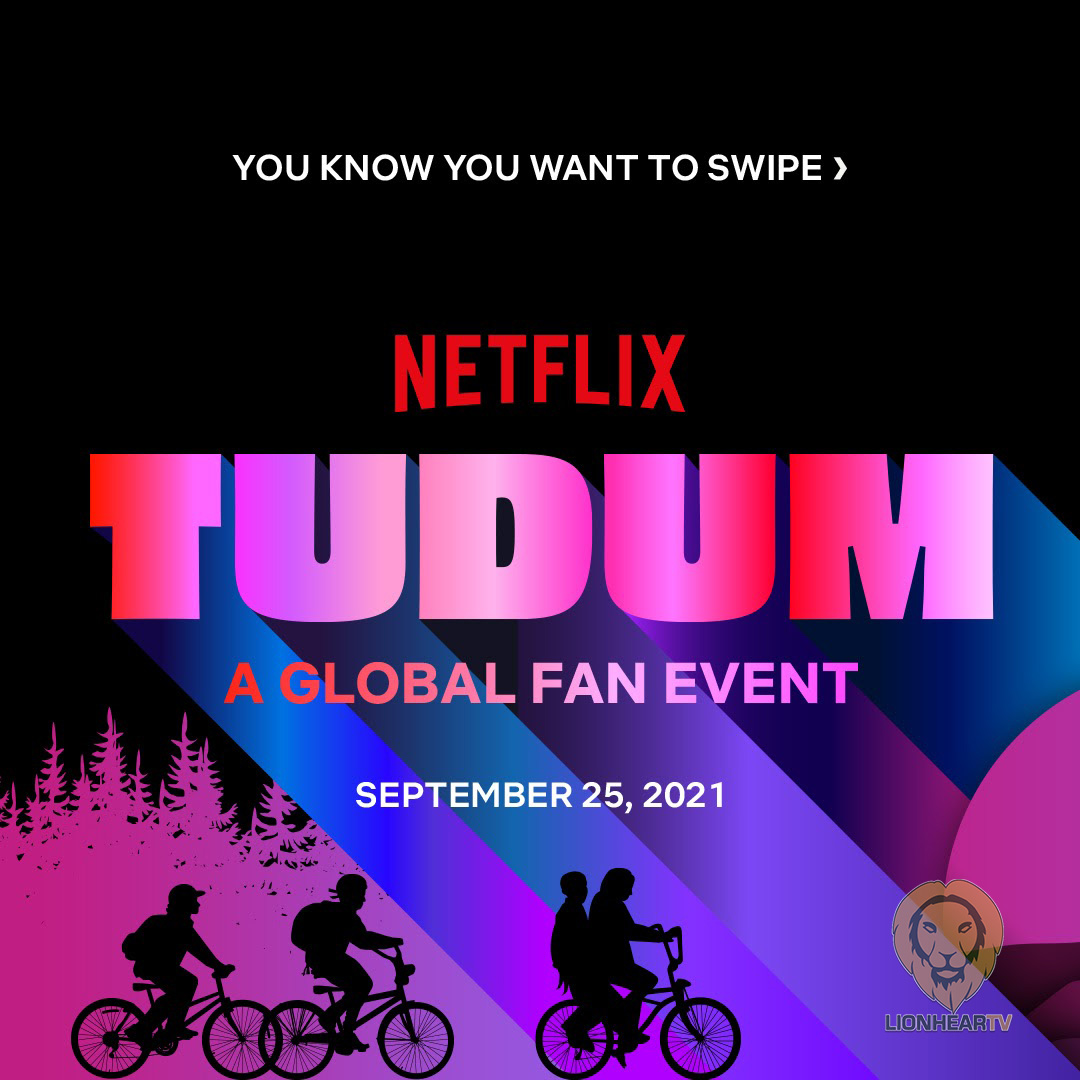 Netflix gives fans a front row seat to its one-of-a-kind series and films, bringing together everything you love about Netflix in one global livestream event – TUDUM. It’s all your favorite stars, exclusive first-looks, exciting new announcements, and so much more happening beginning on September 25, 2021.

Excited yet? Here’s a quick guide to everything you need to know about TUDUM.

A star-studded lineup just for fans

The cast of Stranger Things and Bridgerton. Henry Cavill. Lily Collins. Idris Elba. Dwayne Johnson. Song Kang. N-Ko. A couple of K-Pop stars hosting TUDUM: Korea spotlight, while Radhika Apte will host the TUDUM: India Spotlight! The list goes on and on! Fans will get to see and hear their favorite stars during different segments and panels throughout the event.

Want to hear more about The Witcher’s latest season? Or maybe from Lady Whistledown herself on what might happen in Bridgerton? Maybe you’re ready to return to Hawkins for Stranger Things. There’s something for every fan at TUDUM. Plus, keep your eyes peeled for exciting announcements all throughout the show.

See exclusive sneak peeks at some of the biggest titles coming to Netflix, such as Cowboy Bebop starring John Cho; Neil Gaiman’s long-awaited The Sandman; Zack Snyder’s Army of Thieves; Red Notice starring Ryan Reynolds, Dwayne Johnson, and Gal Gadot; The Harder They Fall with Idris Elba; and the star-studded film, Don’t Look Up, starring Leonardo DiCaprio. From action to fantasy and epic heists across the globe, there’s so much content that’ll keep you at the edge of your seat!

Anime fans are in for a treat as Netflix celebrates both its upcoming anime lineup as well as titles fans already know and love, including Aggretsuko, Bright: Samurai Soul, Pretty Guardian Sailor Moon Eternal The Movie, ULTRAMAN, and many more. Tune in to the TUDUM: Anime Spotlight at 8pm SGT, 25 September 2021.

Ride the K-wave with Netflix

Some of your favorite Korean stars, including Song Kang and Jung Hae-in, will make an appearance on the TUDUM stage. You’ll also get to hear more about new and upcoming Korean content, like Hellbound, My Name, and New World. Tune in to the TUDUM: Korean Spotlight at 9pm SGT, 25 September 2021.

Get to know Bollywood through Netflix

Fans will witness Madhuri Dixit in a never-seen-before role in the upcoming series Finding Anamika along with the acclaimed filmmaker Sanjay Leela Bhansali who shares his vision for his first-ever series and the much-awaited alluring Netflix project, Heeramandi. And for all thriller fans out there, tune in for a very special surprise. Watch the TUDUM: India Spotlight at 9.00 PM IST, 25 September 2021.

How and when to watch

If you’re interested in hearing more about our Anime, Korean content and Indian content line-up, avail yourself to tune into the TUDUM: Spotlights – taking place on September 25, 2021, right before the global premiere.

TUDUM will be made available across Netflix YouTube channels worldwide, in a number of different languages, as well as Twitter and Twitch. For the Philippines, you can watch it on Netflix Philippines YouTube channel.

In Asia, it will be available on the localized YouTube streams below: