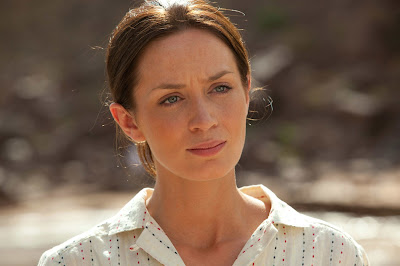 In the film, a visionary sheik (Amr Waked) believes his passion for the peaceful pastime of salmon fishing can enrich the lives of his people, and he dreams of bringing the sport to the not so fish-friendly desert. Willing to spare no expense, he instructs his representative (Blunt) to turn the dream into reality, an extraordinary feat that will require the involvement of Britain’s leading fisheries expert (McGregor) who happens to think the project both absurd and unachievable. That is, until the Prime Minister’s overzealous press secretary (Kristin Scott Thomas) latches on to it as a ‘good will’ story. Now, this unlikely team will put it all on the line and embark on an upstream journey of faith and fish to prove the impossible, possible.

Just as Blunt hits the big screen with “Salmon Fishing in the Yemen,” a couple of movies coming out soon in the United States looks set to catapult her to A-list stardom.

The 29-year-old co-stars with Tom Cruise in “All You Need is Kill,” while she is negotiating to play Nora Charles in a remake of “The Thin Man” starring Johnny Depp, according to Variety.

It looks certain that 2012 will be the year when Blunt, whose star has risen since featuring in “The Devil Wears Prada” six years ago, cements her place in the Hollywood A-list.

“She’s well past the point of upcoming,” said Andrew Saffir, president of New York’s Cinema Society. “If she’s not already, she’s very close to the league of Kate Winslet. She’s a very versatile actress. She was wonderful in `The Young Victoria’ and in `Salmon Fishing’ she displays great timing and a very appealing and natural quality.”

The London-born actress – daughter of Oliver Blunt, who defended serial killer Peter Tobin – first won over American audiences with her portrayal of an American Vogue assistant in “The Devil Wears Prada.” She was asked to lose weight to reach the required fashion ideal, and recalled: “I had to ask just how thin they wanted me to be. They said, ‘On-the-edge of sickness thin,’ so I figured, ‘Great, I’ll call you from A&E.'”

While Blunt isn’t as doll-like as many of her American contemporaries, US audiences have taken to what the New York Times describes as her “distinct whiff of Kensington”.

Saffir said: “Right or wrong, there’s a sense of very serious training that comes with an English background and a perception English actresses are rooted in a rigorous, Shakespearean theatre training that gives them an edge.”

But her appeal is not entirely class-based. Nicholas Stoller, who directed Blunt in “The Five-Year Engagement,” said: “She’s so funny, she has such an amazing intelligence and she’s very pretty, obviously. But she’s still likeable. Women identify with her, men want to date her. She’s got that Meg Ryan thing.”

Blunt made her television debut in 2003 with “Boudica,” and in the same year won acclaim for her performance as the 16th-century queen Catherine Howard in the ITV drama “Henry VIII,” alongside Ray Winstone as the king.

The accolades soon came. The following year she won the most promising newcomer award from the Evening Standard for her part as Tamsin in “My Summer of Love.” A year later she won a Golden Globe for playing the troubled child of a Labour spin doctor in Stephen Poliakoff’s drama “Gideon’s Daughter.”

She has worked steadily every since. But at about the time of “The Devil Wears Prada,” she insisted that she was no workaholic. “You meet a lot of people in this world who are defined by the job they do,” she said. “It’s sad, because they cease to develop on a human level, they’re so fear-driven.”

For “Salmon Fishing in the Yemen” she sealed her reputation for being a light-hearted co-star. She said last week that some people might find her annoying because she liked to “jump around like the Energizer Bunny” on set.

“I always try and have a good time. I think if you approach anything being too earnest or intense it certainly doesn’t do me any favours anyway. I think it should be fun.”

Emily BluntSalmon Fishing in the Yemen