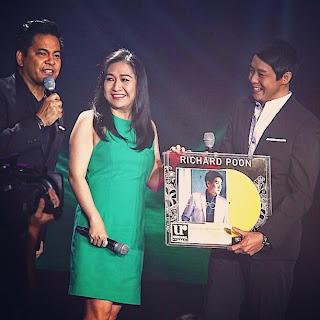 Richard Poon’s first album under Universal Records Legends was recently awarded a Gold Record Award for its outstanding sales. Legends, which includes the hits Truly and Crazy, continues to top music sales charts since it was released four months ago.

With Richard during the awarding is Universal Records General Manager Kathleen Dy-Go.

In Legends, Richard traces his pop roots by singing some of the biggest pop artists in the international music industry – classics by Lionel Richie (Truly), Whitney Houston (All At Once), Barbra Streisand (Evergreen), Madonna (Borderline), Barry Manilow (Ready To Take A Chance Again), Kenny Rogers (Crazy), among others.

Richard also collaborates with friend Christian Bautista in the Michael Jackson hit The Girl Is Mine, which is included in the album.