All four Kapuso sitcoms that air on weekends are winners of their respective timeslots in the rating game. 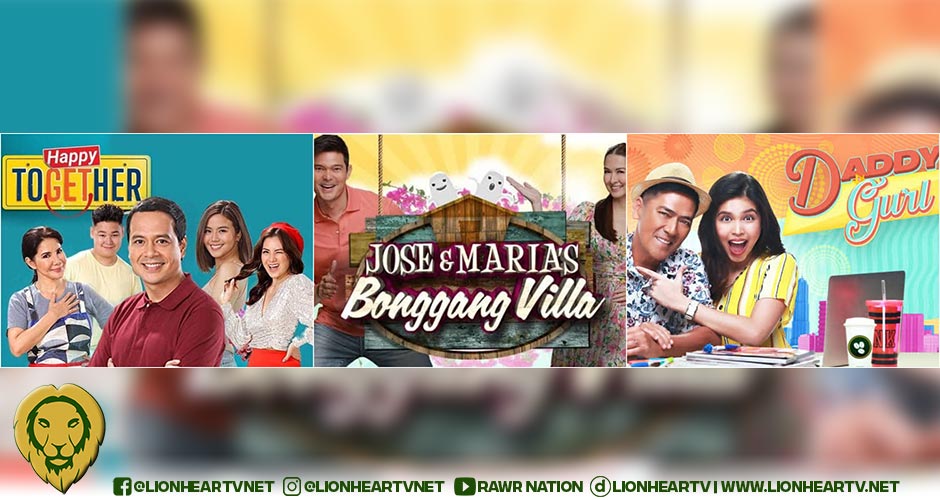 The weekend belongs to GMA Network, especially to Kapuso situational comedies that are currently reigning in the TV rating game. According to the latest data released by AGB Nielsen National Urban TV Measurement (NUTAM), all four Kapuso sitcoms on weekends are winning their respective timeslots.

On Saturday, which sees three GMA Network sitcoms airing on the same night, Dingdong Dantes and Marian Rivera’s comeback project, Jose and Maria’s Bonggang Villa is the second most-watched program throughout the day. AGB Nielsen reported the show posted a 12.4% people rating, on May 21. That’s just 0.4% short of matching Magpakailanman’s 12.8%, to lead all programs that day. The heartwarming sitcom, marks DongYan’s first lead acting project in 10 years, after 2012’s primetime series, My Beloved.

Another Kapuso sitcom, Pepito Manaloto: Kuwento Pa More, is well-ahead its Kapamilya at Kapatid rivals, as it posted a 10.5% people rating on the same day. The series is notably the prequel to the massively successful reality sitcom, headlined by award-winning Kapuso comedian, Micahel V.

Daddy’s Gurl, which airs after Magpakailanman, is equally impressive, despite its later time slot. It was a clear winner according to AGB Nielsen, which reported that the show rated 6.5% on May 21. The sitcom is set to celebrate its 4th anniversary on air in October, this year.

On Sunday, John Lloyd Cruz’s comeback project, Happy ToGetHer, is the most-watched among all local programs. AGB Nielsen’s latest data indicate that the show is reigning supreme with a 15.6% people rating on May 22. That’s even higher than the long-time leader, Kapuso Mo, Jessica Soho, which settled for a settled place with a 15.3% TV rating.

ABS-CBN’s sole sitcom on weekend, My Papa Pi, is not short of wonder, either, as it still impressed with its 2.2% people rating, despite A2Z’s limited free TV reach. The series is Piolo Pascual’s first acting project with ABS-CBN, in four years, after 2018’s Since I Found You.