In a bid to fortify its weekend lineup, GMA Network intensifies its Saturday afternoon and primetime block with a bigger and bolder programming schedule beginning November 20. 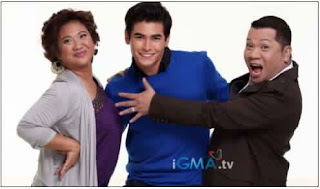 The slate of new programming lineup is anchored by the network’s vision of offering innovative and well-crafted programs which are in tune with the preferences of its primary audience.

A totally exciting, totally exclusive and totally explosive episode of Startalk TX should not be missed this Saturday as it features only the hottest stories, most intriguing controversies and juiciest blind items in and out of local tinseltown at 2:40PM. Hosted by the formidable team of Lolit Solis, Butch Francisco, Joey de Leon and Ricky Lo, Startalk TX is the longest-running showbiz-oriented talk show in the country.

This Saturday, Wish Ko Lang, hosted by Vicky Morales, brings new hope to a college student who works as a “magbobote” – someone who buys and sells recyclable materials like used bottles, old newspapers – to pay for his tuition and a child who needs an urgent brain surgery. Jundre “Ricky” Gallardo left Cebu to find what he hopes to be a better life in Manila. To pay for his tuition, he uses his free time to go around from house to house buying and selling recyclable materials. Ricky dreams of one day becoming the first in his family, so far, to receive a college diploma. Magda, on the other hand, is the little girl who was born with a condition that requires her to undergo brain surgery. Her parents have taken her to several specialists who have said that she has very little chance for survival. Could there still be hope for little Magda?

The Kapuso Film Festival will follow with the Philippine television premiere of the blockbuster remake of Carlo J. Caparas’ celebrated classic, Ang Panday, starring no less than Senator Ramon “Bong” Revilla Jr. Directed by Mac Alejandre and produced by GMA Films and Imus Productions, Ang Panday chronicles the exploits of Flavio, the original Panday, and his quest to end Lizardo’s evil reign on earth. Aside from being the most awarded film in last year’s Metro Manila Film Festival, it was also proclaimed as the top grosser among the seven entries in the competition.

24 Oras Weekend, anchored by Jiggy Manicad and Pia Arcangel, delivers the biggest news of the day. Backed by the country’s most respected news team that has won both local and international honors, 24 Oras Weekend delivers Serbisyong Totoo every Saturday after Wish Ko Lang; and on Sundays, after Showbiz Central.

Imbestigador, hosted by award-winning broadcast journalist Mike Enriquez, goes after big-time drug dealers. With the help of National Bureau of Investigation and several “assets,” the program that took investigative reporting to a whole new level was able to participate in a buy-bust operation involving P15-million worth of cocaine! The follow-up operation led to the supplier of the drug dealers busted earlier. But, according to the NBI, the investigation could lead them to even more powerful people. Dig deeper with Imbestigador this Saturday, after Kapuso Mo, Jessica Soho.

To lighten your Saturday night viewing, the side-splitting duo of Allan K and Eugene Domingo delivers another riotous episode in Comedy Bar Expect a lot of laughs, comedic antics and funny dialogues as Brazilian-Japanese hunk Fabio Ide together with the “Beergins” and Six-Feet Long Band showcase live stand-up comedy, uproarious segments and hilarious song numbers that will surely tickle the hearts of the viewers.

Catch these Kapuso shows as they air this Saturday, November 20 only on GMA. (Text and photos courtesy of GMA Network). – iGMA.TV