Jessy Mendiola is a 26-year old stunner known for her role as ‘Maria Mercedes.’

With a body to die for and a sultry image, it is no wonder that Mendiola was recognized as the No.1 Sexiest Woman in the Philippines by the men’s magazine FHM Philippines in 2016.

She has starred in various TV shows of ABS-CBN, where she showcased her talent in acting in such projects as Maria Mercedes, Sabel, E-boy, and You’re My Home, to name a few.

Her latest film is the movie Stranded that she top-bills alongside Arjo Atayde, and is still showing in cinemas nationwide.

For two years and counting, Mendiola has been in a relationship with actor and TV host Luis Manzano. But despite  their going-strong relationship, there are still people who bash them, particularly, Mendiola after being accused as a ‘Boyfriend-Stealer’.

We all know that before Mendiola, Manzano was in a relationship with The General’s Daughter star, Angel Locsin. After their first break-up in 2009, Manzano and Locsin got back together in 2014. They tried to work things out but in 2016, fans were shocked with the revelation that they, once again, split up.

Many were hoping that they’ll end up together, but they just didn’t work.

5 months after the break-up issue, Manzano announced that he is exclusively dating Mendiola. Rumors started saying that Mendiola stole Manzano from Locsin.

Manzano defended her girlfriend saying that Jessy has nothing to do with his past relationship and that the allegations were not true since its been five months after he and Locsin called it quits.

Bashers didn’t believe Manzano and until now, they keep on accusing Mendiola as a ‘Boyfriend Stealer.’

Through Instagram, Mendiola, as one of the celebrities that frequently react to bashers, answered a netizen who brought up the the never-ending issue involving her, Manzano, and Locsin.

Mendiola emphasized that she doesn’t have to admit something she never did. 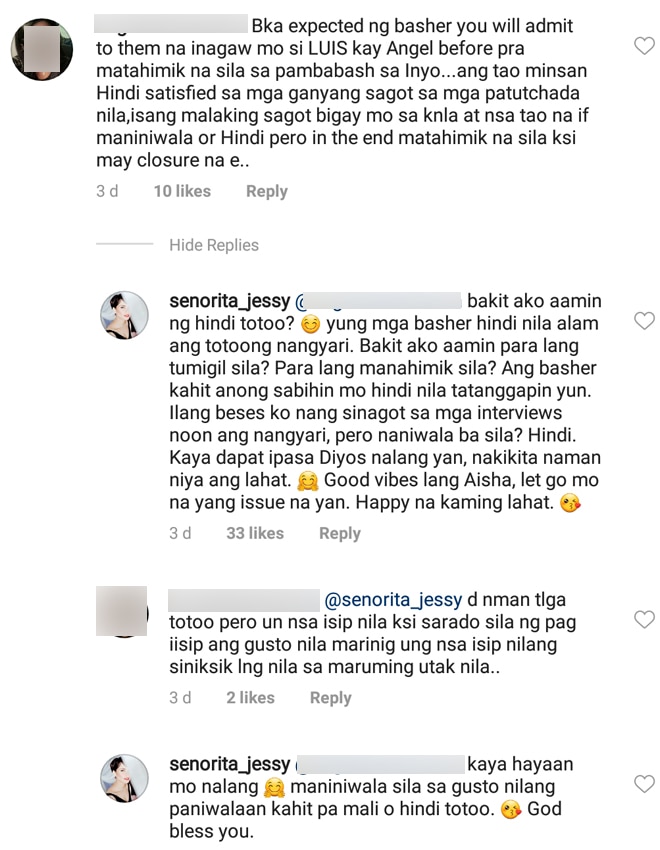 She also responded that she already expressed her side many times on interviews, and to her dismay, they didn’t believe her.