Housemates Andrea Abaya, Jie-Ann Armero, Liofer Pinatacan, and Kobie Brown successfully defended their slots in the Big 4, making them as the official housemates who will proceed to the “PBB Connect” Big Night on Sunday (March 14).

Although the battle was difficult for the Big 4 when it was revealed that ex-housemates Amanda Zamora and Ralph Malibunas were returning as challengers, their determination reigned supreme in their quest to fight for their dreams.

The first ones who faced the challenger task were Ralph, Andrea, and Kobie, followed by Amanda, Jie-Ann, and Liofer. The challenger tasks, a combination of previous tasks in the current season, were handpicked by the Kumunity who always have a say in the happenings inside the ‘PBB’ house.

Being part of the Big 4 was no easy feat that 177,524 auditionees aspired for when they auditioned in Kumu in November to be part of the official housemates of “PBB Connect.”

Andrea, the ‘Cheerdance Sweetheart ng Paranaque,’ proved that self-confidence is the first step in reaching one’s goals -from accomplishing secret tasks when she was still an isolated housemate to winning the first ‘Apat na Karapat Dapat’ challenge.

Jie-Ann, the ‘Kwelang Fangirl ng Sarangani,’ showed that knowing how to nurture relationships with others is a crucial skill in life, making her connect well with fellow housemates.

Liofer on the other hand, the ‘Dong Diskarte ng Zamboanga Del Sur,’ showcased his strategic thinking in every task and his sense of responsibility inside the house. 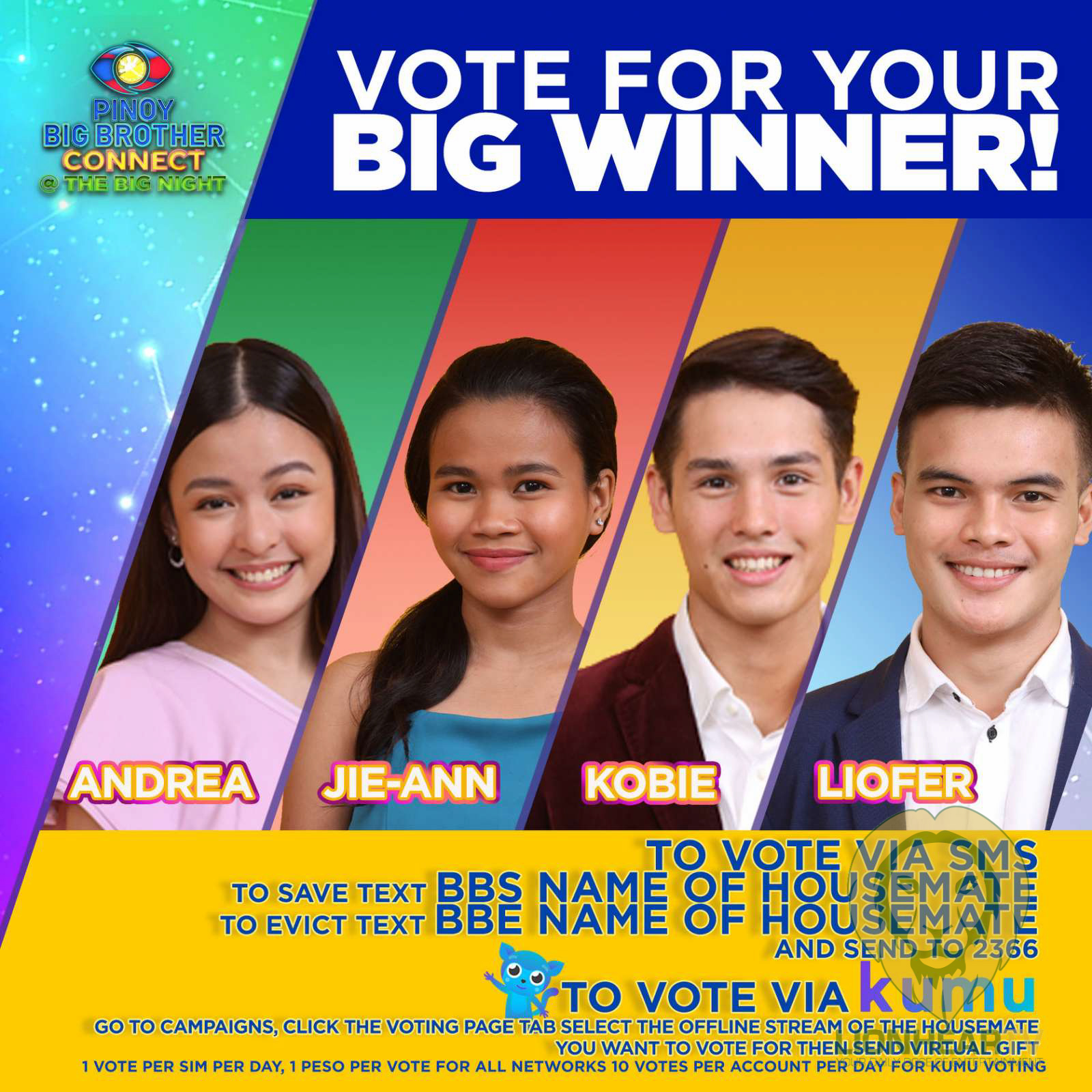 Meanwhile Kobie, the ‘Charming Striker ng Parañaque,’ made viewers realize that staying positive and determined will help anyone win in the game of life.

Who among Andrea, Jie-Ann, Liofer, and Kobie will clinch the coveted Big Winner title of “PBB Connect?” Find out during the “PBB Connect” Big Night on March 14 (Sunday), 9 pm on Kapamilya Channel for cable and digital TV, Kapamilya Online Live on Facebook and YouTube, A2Z Channel 11, TV5, iWantTFC, and TFC. To be part of the virtual audience, tickets are now on sale via KTX.ph for only P199. Proceeds will go to charity. For more details, follow @ABSCBNPR on Facebook, Twitter, and Instagram, or visit abs-cbn.com/newsroom.