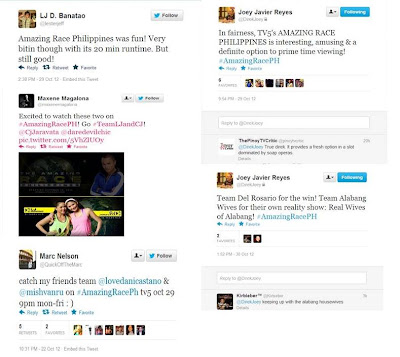 Twitter was abuzz the past few nights as netizens used the show’s (official hashtag) #AmazingRacePH in saying they felt “bitin” and could not wait to see the next episode.

He furthered that he’s rooting for football brothers Armand and Anton del Rosario and suggested that the Alabang housewives have their own reality show.

TARP is also a hot topic on PinoyExchange, with forum members saying how proud they are of how the Philippines is showcased in an international program franchise. User lieh_cloeh was one with many netizens who ask for more: “my only concern for this show is that nakakabitin.  nasanay lang ako sa US na tapos na in 1 episode. but, tarph is exciting nonetheless. when patapos na siya, sa isip ko, I want more pa. nakaka-hook kasi.”

Catch TARP from Monday to Friday after Wil Time Bigtime and on Saturday after Talentadong Pinoy Worldwide on TV5. Get real-time updates online viathe show’s official social media accounts: @Amazing_RacePH and hashtag #AmazingRacePH on Twitter and The Amazing Race Philippines fan page on Facebook. You may also visit www.theamazingrace.ph for exclusive online contents about the show.