After liking a comment, Netizens wondered over Dimples Romana‘s reaction if it’s a confirmation to the real-score of the rumored couple Julia Montes and Coco Martin. 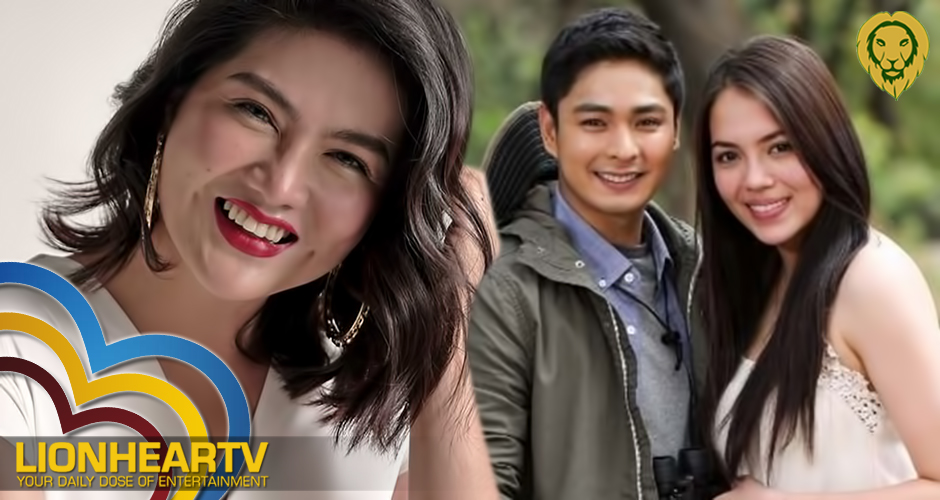 Romana recently collaborated with Montes on her latest YouTube vlog.

The comment section soon filled with reactions from the followers, who missed the young actress on screen.

Among those who caught her attention was Lee Cordero, a Netizen who commented, “Swerte ni Coco.”

However, what got the attention of the Netizens was when Dimples Romana liked it after. The seasoned actress gave her approval in the said comment by sharing a heart icon. 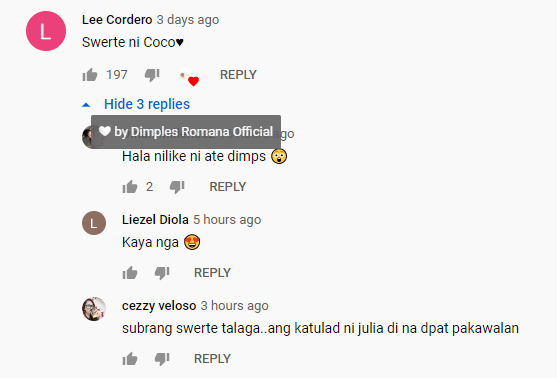 A few days earlier, Julia rekindled her fans’ curiosity with her definition of her ideal man.

The lie detector toy said that she was lying in all of her preferences. Montes’s choices pointed out Coco Martin’s close description as her ideal man.

Following the success of their preeminent team-up in Walang Hanggan, in 2013, they starred in a romantic drama film A Moment in Time.

The two proved their affective onscreen chemistry, which made them a love team on television.

Both also appeared on Yamashita’s Treasure, a Wansapanataym episode in 2015.

In that same year, dating rumors began to circulate. But they then went on to do separate television and film ventures on their own.

In October 2016, when a rumor circulated about Martin urging Montes to leave Star Magic and move to Cornerstone Entertainment–so they could admit their relationship to the public.

However, no disclosure took place between the two, and they chose to remain mum about it.

In December 2017, the news broke out about their split-up even without officially admitting their kept relationship.

That same month, rumors circulated that Julia was pregnant with her child and decided to hide it from the public by traveling to Germany.

Her camp dismissed the reports of her pregnancy and said she just flew to Germany to spend more time with her biological father after fans learned that the actress had already gone to the European country.

She shed light on the rumors between her and Coco through a separate interview in January 2018. She dismissed the suspicions of the public. They are together it’s because of their closeness.

Her fans also noticed that Julia was not anymore in circulation after the afternoon drama series Asintado concluded.

Netizens quickly referred to Julia when blind items surfaced about a young actress who gave birth to her first child in April 2019.

According to reports, the actress gave birth in late March 2019 at Cardinal Santos Medical Center in San Juan City.

Both Montes and Martin were very vocal about their closeness and how special they treat each other. However, amid issues and intrigues, they remained quiet on the real-score between them.

Until now, no one from their camp had directly confirmed or denied the rumors about them. Although she was still on break from showbusiness, Julia remained supportive of Coco’s projects.