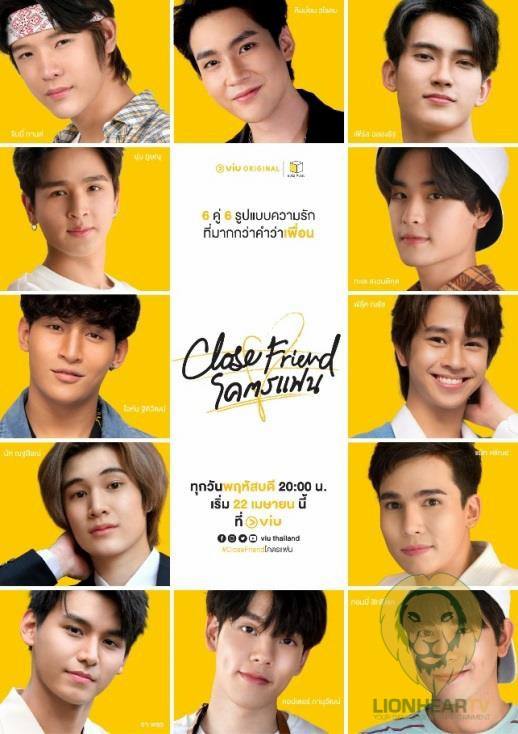 With six different love stories, Boxx Music’s talented artists have composed six original soundtracks to inspire the narratives. These songs, which share the same titles as the series, include Accidental or Intentional by Ink Waruntorn Paonil, the label’s new Synth- Pop sensation; Enough for One Lifetime, a song for the brokenhearted by singer and songwriter, O-Pavee Kotchapakdi; To Think – Not to Think by sweet pop singer, Earth Patravee Srisuntisuk; To Act Like We are in Love, a song about unrequited love by Marc Tatchapon Chulkasem; Just be Friend by Copter Witsarut Laocharoenchai, and Your Problem, My Solution, a song about long-distance relationships by Cake Pemika Jiranaraks and Muang Songmuang Chaiyariti from Serious Bacon.

The Close Friend miniseries showcases diverse relationships between the characters. To Act Like We are in Love, starring Ohm Thitiwat Ritprasert and Fluke Natouch Siripongthon, tells the story of a couple’s challenges in their three-year relationship. Just be Friend is a story about an adorable cat who falls in love with his owner, featuring Ja Phachara Suansri and First Chalongrat Novsamrong. Accidental or Intentional follows the irresistible and intensifying romance between a business major freshman and a senior in his Judo Club. Yoon Phusanu Wongsavanischakorn and Lay Talay Sanguandikul bring their chemistry to the screen with Enough for One Lifetime, exploring the protagonist’s desire to be more than friends, resorting to dark magic to make his wish come true. Kimmon Warodom Khemmonta and Copter Panuwat Kerdthongtavee’s performance in To Think – Not to Think uncovers what it might be like to get closer to a beloved idol. Set back in the 1990s to shower audiences with feel-good nostalgia, Your Problem, My Solution starring Jimmy Karn Kritsanaphan and Tommy Sittichok Pueakpoolpol reminisces on the purity of love and friendship.

Mr. Ratchapol Chitpuengtham, Director, Creative and Business Development of Viu Thailand, said, “Viu initiated this Boys Love series collaboration as we want to tap into a new generation of audiences and constantly deliver new engaging premium contents to our Viu-ers. Boys Love series are on the rise in Thailand and other markets. As a powerful magnet, Viu brings 12 top-notch actors with a huge following, accompanied by six celebrated artists from Boxx Music in order to attract new fans.”

Mr. Chodchapak Pholthanachod, Managing Director of Boxx Music, added, “Another project highlight is that the miniseries are inspired by different love narratives from six soundtracks performed by Boxx Music’s talented artists. Close Friend is a new form of contents that will excite Viu-ers.”

Viu-ers can watch Close Friend series every Thursday starting from April 22 on Viu across 16 markets. Download Viu for free on App Store, Google Play, and selected smart TVs, as well as on the website at www.viu.com.