After 12 weeks of amazing transformations, the celebrity performers of “Your Face Sounds Familiar Season 3” will face-off for the final time in The Grand Showdown, hosted by Luis Manzano, that will air LIVE this Saturday (May 29) and Sunday (May 30) on Kapamilya Channel and A2Z channel 11. 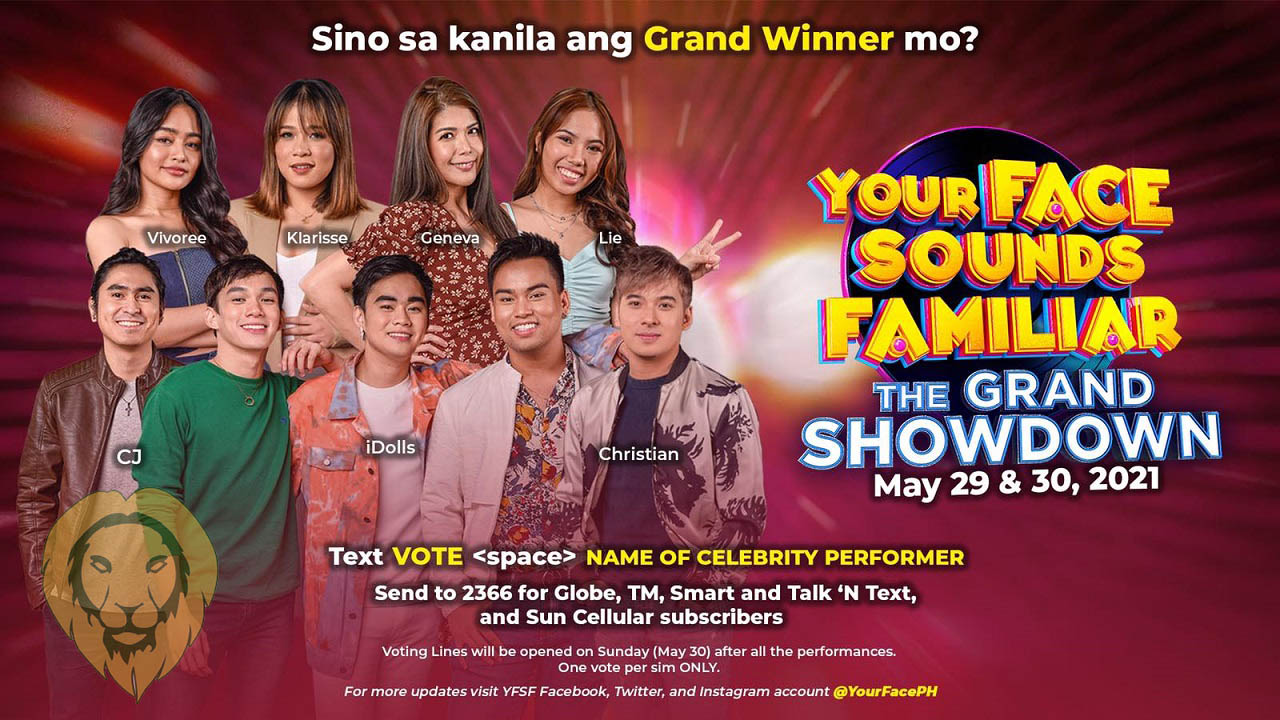 Christian Bables, CJ Navato, Geneva Cruz, the iDolls, Klarisse de Guzman, Lie Reposposa, and Vivoree Esclito will enter the iconator again for a chance to win a trophy, brand new house and lot, and P1 million, but this time they will come out as the music icon of their choice.

Aside from the contestants’ final performances, viewers should also watch for the first ever guesting of Filipino music icon, Asia’s Songbird, Regine Velasquez-Alcasid in the hit Kapamilya musical variety competition.

KaFamiliars will find out this weekend who the celebrity performers choose to impersonate but they may get a clue on who they will choose based on how the contestants fared in the past three months during the weekly competitions.

All celebrity performers experienced winning this season. They all had the chance to impersonate both local and foreign artists and both female and male performers with the guidance of celebrity mentors Jed Madela and Nyoy Volante.

Jhong Hilario, who withdrew from competition to ensure the safety of his newborn daughter and wife mid-season, won in the show’s first two weeks as Apl.de.Ap and Bamboo.

In the Grand Showdown, 50 percent of the final scores of the contestants will come from the combined scores given by the jury, composed of Gary Valenciano, Ogie Alcasid, and Sharon Cuneta, from Week 1 to Week 12. The other 50 percent will come from text votes of the viewers.

Voting lines will be opened on Sunday (May 30) after all the performances. To vote, just text VOTE NAME OF CELEBRITY PERFORMER and send to 2366 for Globe, TM, Smart and Talk N Text, and Sun Cellular subscribers. One vote per sim only.

Find out who will join Melai Cantiveros-Francisco and Denise Laurel as Filipino Grand Winners of “Your Face Sounds Familiar,” which also had kid editions won by Awra Briguela and TNT Boys.

Watch “Your Face Sounds Familiar Season 3: The Grand Showdown” LIVE from the ABS-CBN Studio 10 this Saturday (May 29), 8 pm and Sunday (May 30), 7:30 pm on Kapamilya Channel, A2Z channel 11, Kapamilya Online Live, and iWantTFC.