National Artist for Literature F. Sionil Jose condemned Journalist Maria Ressa’s 2021 Nobel Peace Prize award on October 8, when Ressa and Russian journalist Dmitry Muratov were given the peace prize for their “courageous fight for freedom of expression in the Philippines and Russia.” 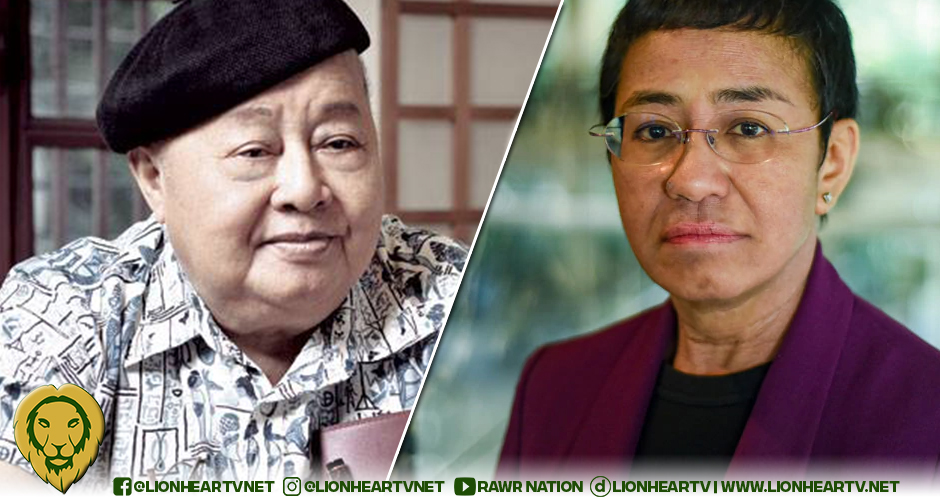 On October 9, Saturday, Jose published his sentiments in a facebook post saying that Ressa did not deserve to be the first Filipino to receive the Peace Prize.

He stressed that the “Philippine press is alive and well not because of Maria Ressa.”

Jose argues that ABS-CBN was closed due to “money, politics, power and its abuse by the Lopezes who owns the TV network.

“Sure, journalists have been killed in the Duterte regime just as it was in past administrations. But those killings cannot be laid at Duterte’s door. Usually, they are made by minor politicians or officials attacked by journalists.”

He also added that journalists were severely tested during the dictatorship of Ferdinand Marcos, which shut down all media and imprisoned journalists, and not during Duterte’s regime.

Ramon Magsaysay Awardee for Journalism went on questioning the credibility of Ressa saying that he hasn’t “read anything memorable by (Ressa).”

In the last part of his post, he said that other great journalists in the country have fought against Marcos.

“My opinion as a reader- I’ve read your books and I’ve read Maria’s books. She’s a much better writer. Your books are hard to finish. Your dialogue is stilted and unrealistic,” said Severino.

“Even your columns contain little to no insight. But I like your bookstore,” he added.

Writer and film critic Richard Bolisay also lambasted Jose and said, “How awful to be an unloved author whose books and awards mean nothing to many.”

How awful to be an unloved author whose books and awards mean nothing to many pic.twitter.com/P2jJS1EEQD

He wrote, “We can have different opinions about @mariaressa but, to gloss over what she, Rappler & ABSCBN faced is revisionism.”

Sir,
You are a legend in literature but, facts are immutable. We can have different opinions about @mariaressa but, to gloss over what she, Rappler & ABSCBN faced is revisionism.Respectfully, we shouldn't trivialize the suffering of others as we sit on our comfortable pedestals. pic.twitter.com/SY4DjwxxPX

Human rights activist and entrepreneur Francis Baraan IV posted a screenshot of his response to Jose.

My reply to F. Sionil Jose to his Facebook Post about Maria Ressa not deserving the Nobel Peace Prize, because her winning was just influenced by Western media hype. pic.twitter.com/ODdOvZ3Iyl

Despite the negative comments, some celebrities and fellow journalists expressed their joy for Ressa and congratulated her for her achievement.