The actor-host shared in his vlog a tour of the noon time show’s new studio and the thoughts of its director on the motivations behind the studio’s new design. 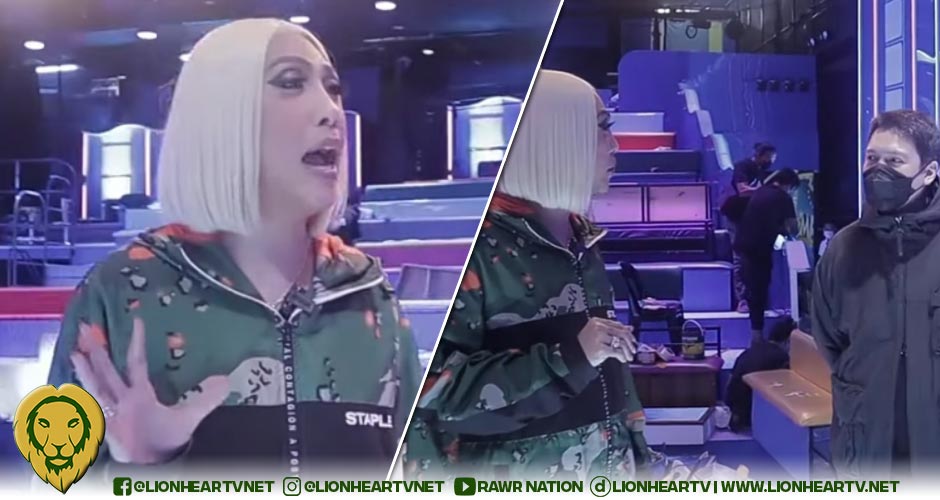 Vice Ganda toured the ‘Madlang Pipol’, the viewers of the noon time show, It’s Showtime, and his nearly 7 million followers on his YouTube channel, in the newly-renovated studio of the show. It’s Showtime temporarily used Studio 10, which houses the Sunday noontime musical variety show, ASAP Natin ‘To, for more than a week. The grand final show of Showtime SexyBabe, which declared Sam Coloso–as the first grand winner, was notably held at the said production studio.

The comedian-host shared a look on the ‘new look’ of the new studio, as workers made some last-minute fixes, before the madlang pipol could fill it up on Monday, July 25. Direk Jon Moll, the director of the show, was present during Vice Ganda’s ocular, and he got asked about the show’s intensive preparations for the Monday show.

When asked about the motivations behind the new studio design were, Moll shared that he had the happiness of the people in mind, when his team drafted the design.

“Kasi you want to keep the energy high. You want everyone to feel that they are part of the show,”

He answered Vice Ganda’s query on his choice to adopt a ‘club like’ vibe for the new set.

Vice Ganda took the time to thank the viewers and sponsors of the show, as they allowed them to fund the renovation of the studio.

“(We were able to gather funds. That is why I am thanking all our sponsors. We we were able to save enough, amid our struggles in the last few years),” he noted.

The comedian-host noted the wise choice to use color blue as the dominant shade inside the studio as it promotes happiness.

“Very calming din.So when the energy coming from the host that’s very high, you don’t feel overwhelmed, kasi the space is very shielded.

“(It gives balance. As you can see, the energy of the live audience and the hosts is really high; it explodes. It really needs some sort of a downer to keep everyone’s happiness on a tolerable level),” Vice Ganda added.

During the tour, it revealed that the show could currently accommodate up to 100 live studio audiences only, but efforts are being made to improve it.

“(We are of course, considering safety and health protocols. We can not just allow a big crowd, not to mention it is too pricey too, in our part. We admit that our budget still isn’t big enough to accommodate more people),” he confessed.

As revealed on Vice Ganda’s vlog, the last time the It’s Showtime studio had a renovation was in 2017, or five years ago.