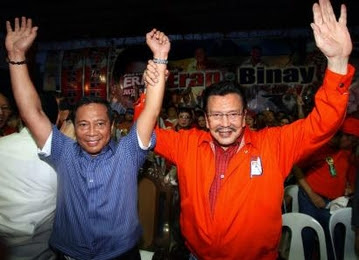 The merger of Vice President Jejomar Binay’s party, PDP-Laban and former President Joseph ‘Erap’ Estrada’s Pwersa ng Masang Pilipino (PMP) has not only signaled the start of the country’s campaign season but has also drawn mixed reactions from their political opponents.

Some of them believe that the creation of UNA can also influence the ongoing impeachment trial of Chief Justice Renato Corona because Binay, who expressed his intention to run for president in 2016, would benefit from Corona’s acquittal.

The UNA coalition has already invited popular senatorial bets for their slate including Joey de Venecia III, Loren Legarda, Alan Peter Cayetano, and Francis Escudero. Who else are speculated to be the coalition’s potential candidates in the 2013 senatorial race?

Meanwhile, Gretchen Malalad will learn a new self-defense sport called Krav Maga from Israel that combines striking, wrestling, and grappling techniques that can be used in life threatening situations such as rape.

Know the stories behind the news tomorrow (April 24) in “Patrol ng Pilipino” after “Bandila” on ABS-CBN or watch it earlier on DZMM TeleRadyo (SkyCable Channel 26), 9:15 p.m.