The seven-member Pinoy Pop or “P-Pop” group Down to Mars launched their first recording album yesterday, May 22, at Dolce Bar on Timog Avenue, Quezon City. The album entitled Down to Mars contains five songs including a Tagalog ballad “Nandito Lang Ako” and the carrier single “My Everything,” which also comes with a remix version. 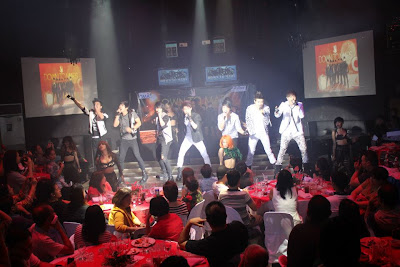 Members of the group Kiro, Yheen, Daisuke, Sky, Jeongwon, Jang and Kenji showed their amazing performance to their fans and some members of the press and VIPs who were present during the launch, including former GMA SVP for Entertainment TV Wilma Galvante who was the guest of honor.

The boys dedicated their only Tagalog song in the album to Galvante, who they said was instrumental in the formation of the group.

Down to Mars was formed in 2011 through the initiative of dance choreographer, and now the group’s co-manager, Geleen Eugenio. The group is co-managed by GMA’s Talent Development and Management Department or the GMA Artist Center.

Jang and Daisuke told Eugenio that they have peers who are also good performers. Two days later, the group showed their talent to Eugenio, who in turn introduced them to then GMA Entertainment TV Group Head Wilma Galvante.

The then nameless group performed in front of Ms. Galvante and all the program managers. The entertainment heads were impressed and not long thereafter, the group signed up for a co-management contract with GMA Artist Center.

Since then, Down to Mars has been a mainstay in the Sunday afternoon musical variety show Party Pilipinas. They were officially launched on television on May 22, 2011, exactly a year before the launch of their first album.

The members of the group are unanimous in saying that the release of their first album was a dream-come-true. And now that their first dream has become a reality, they’re working on the other items in their wish list like having a TV show of their own.

GMA Entertainment Vice President Marivin Arayata, who was also a special guest during the launch, granted their wish and promised to guest the group in her comedy shows.

The year 2012 has so far been a lucky year for Down to Mars. Incidentally, the song “2012” was what they sang when they were launched in Party Pilipinas a year ago. Also this year, the Department of Tourism chose Down to Mars to represent the country in the celebration of South Korea’s national day on July 22, where they will perform three songs including “Bonamana (Beauty),” a hit single of the popular South Korean Pop (K-Pop) group Super Junior.

The group said that they will be working doubly hard to practice for that big night.

The album Down to Mars is distributed by Polyeast Records.