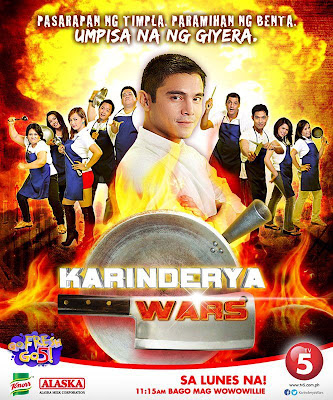 Filipinos are known to be one of the best cooks in the world.

Without a doubt, we house the most unique and appetizing dishes one can ever taste. Local and even foreign visitors can attest to that. Philippines is a bastion of superb food infuse with culture and good ‘ol flavors, creating an avenue for food enthusiast everywhere else to experience food euphoria. It is of no surprise that various cooking programs are aired on local television. This April, TV 5 is serving us a new reality show called ‘Karinderya Wars’. This program is far from the usual cooking show though. For the first time in the Philippine TV history, contestants will demonstrate not only their cooking skills, but also their entrepreneurial side. ‘Karinderya Wars’ is the first ever ‘Luto-Negosyo’ to be hosted by none other than Mavin Agustin.

During the show’s press conference, Marvin, who is also the show’s producer,  is very enthusiastic about this newest offering. He says that he is thankful to TV 5 for giving him the opportunity to fulfill this venture that will educate not only its contestants, but also the televiewers.

Marvin is a businessman himself and he wants to be a part of the movement to strengthen the food industry in the country. He also wants to give talented cooks in the country the opportunity to sharpen their skills in cooking and to be taught how the food business works.

From thousands of cooks who auditioned, only nine made the cut. The contestants have expressed their excitement about the show and are all up to the challenge of proving to us that everyone can cook amazing meals while balancing the business side of it.

The kusina warriors include the former OFW Vivian Pinlac, the singing cook Cesar Enriquez, the motherly Rose Estanol, the bubbly Mary Jane Ahunciacion, the all-around hottie Rona dela Rosa, the fearless Sha-Sha Resimolo, the spice master Aashish Mirpuri, the former model Aiman Perea and the gentle ginat Agot Evangeloista. Every week, one will be eliminated after each challenge and the remaining contestant at the end of the show will be hailed as the winner. The winner will be claiming one million-peso worth of prizes and a negosyo showcase to help the winner start up or expand his food business.