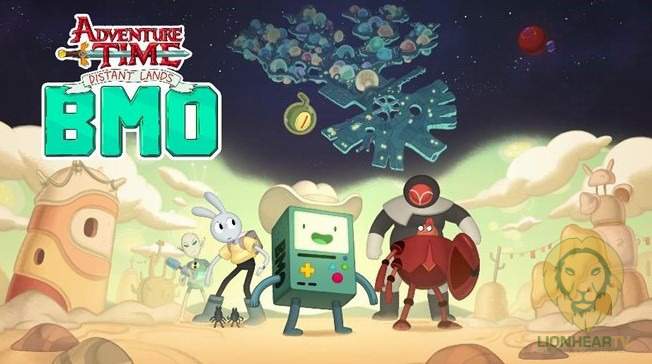 These long-awaited new specials will continue Cartoon Network’s Adventure Time stories that captured imaginations and introduced unlikely heroes and best-buds – Finn the dog and Jake the human – who traversed the mystical Land of Ooo and encountered its colourful inhabitants.

• BMO follows the lovable little robot from Adventure Time. When there’s a deadly space emergency in the farthest reaches of the galaxy, there’s only one hero to call, and it’s probably not BMO. Except that this time it is!

En route to Mars, BMO gets sucked into a wormhole and crash lands on an unknown alien world. On this decaying distant land, BMO finds competing alien races mired in a conflict over dwindling resources and appoints himself sheriff of this seemingly lawless outpost.

He deputises a reluctant new friend, Y5, but Y5’s family has other plans for BMO: complete dismantling! Realising BMO’s importance, Y5 joins forces with our robot hero to save this alien world and uncover the real reason her people are on the brink of extinction.

In Southeast Asia, the remaining three episodes will be available on Cartoon Network and HBO GO in 2021.

• Obsidian features Marceline and Princess Bubblegum as they journey to the imposing, beautiful Glass Kingdom—and deep into their tumultuous past—to prevent an earth-shaking catastrophe.
• Wizard City follows Peppermint Butler, starting over at the beginning, as just another inexperienced Wizard School student. When mysterious events at the campus cast suspicion on Pep, and his checkered past, can he master the mystic arts in time to prove his innocence?
• Together Again brings Finn and Jake together again, to rediscover their brotherly bond and embark on the most important adventure of their lives.

Created by Pendleton Ward and executive produced by Adam Muto, Adventure Time is a critically decorated show that garnered numerous entertainment awards and cultivated a generation of talent who have helmed such hits as Steven Universe, Over the Garden Wall, and Clarence. Adventure Time: Distant Lands is produced by Cartoon Network Studios and is an HBO Max Original series.

Stream or download Adventure Time: Distant Lands on HBO GO. Download the app at the App Store or Play Store on your device and enjoy a 7-day free trial. Access HBO GO via Cignal or at https://www.hbogoasia.com/. HBO GO can now be accessed via Android TV, Apple TV, LG TV and Samsung Smart TV – and comes with AirPlay and Google Cast functionality.