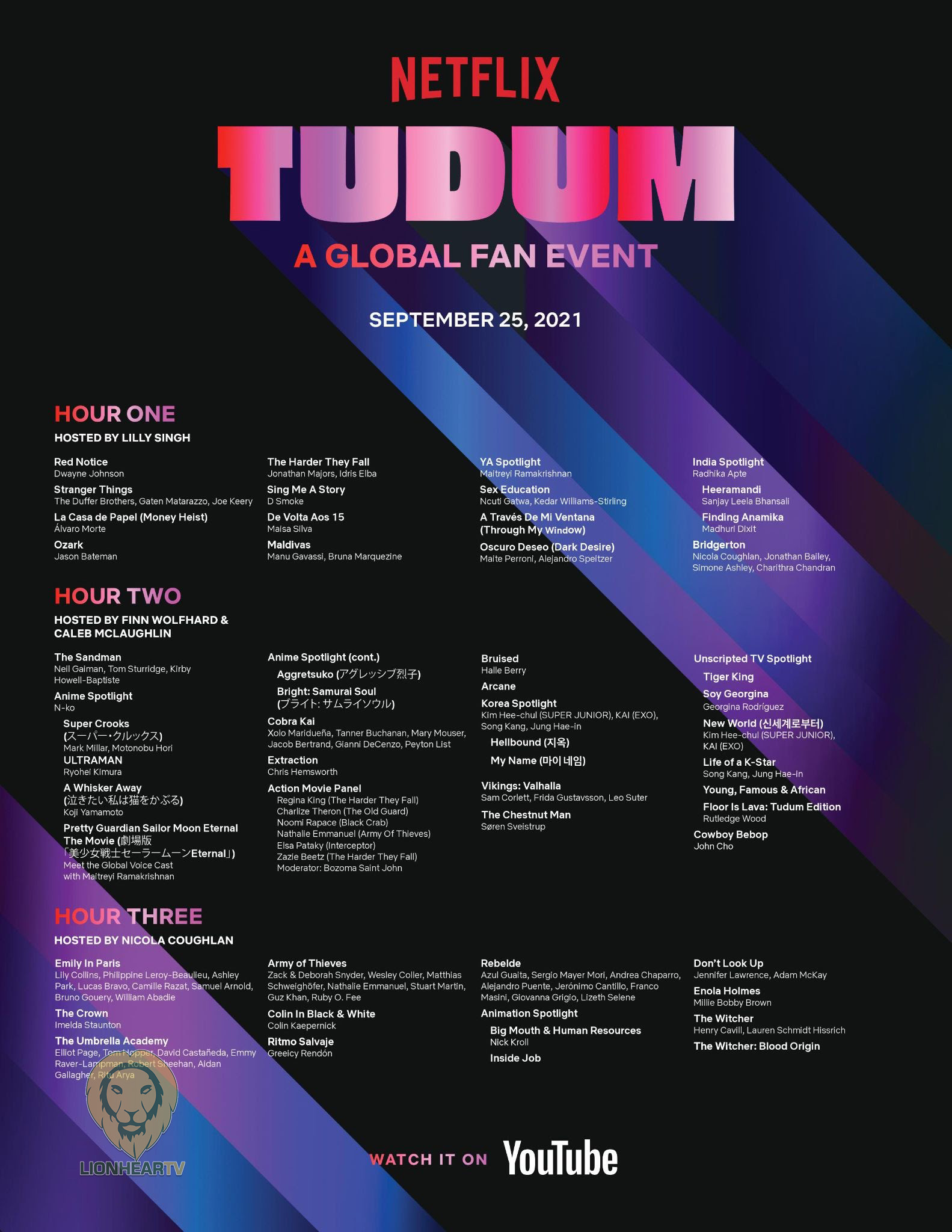 Comedian Lilly Singh will host the first hour, which includes an exclusive clip from the new heist film Red Notice, first looks at the latest seasons of Bridgerton and Ozark, and a special Stranger Things surprise.

Bridgerton’s Nicola Coughlan will serve as master of ceremonies for the third and final hour, with highlights like the first teaser and premiere date reveal for Emily in Paris Season 2, a special greeting from The Crown’s new Queen, an exclusive clip from the new film Don’t Look Up, behind-the-scenes video with the cast of Umbrella Academy, the trailer debut of Army of the Dead prequel Army of Thieves, and first looks and breaking news from The Witcher.

More than 145 of our biggest stars and creators from around the world — representing over 100 series, films and specials — will join the virtual stage for this exciting day full of exclusives and first looks.

Inspired by the first beat you hear when you watch a show or movie on Netflix, TUDUM is our first-ever global fan event. Our goal is simple: to entertain and honor Netflix fans from around the world.

When and where to watch TUDUM

The three-hour Netflix TUDUM virtual event will premiere on September 26 at 12 am PHT. The event will be broadcasted on Netflix Philippines’ YouTube channel.

There will also be special pre-shows spotlighting Korean and Indian series and films, along with exciting anime content beginning September 25 at 8pm PHT on specific channels.

Over 145 stars and 100 films and series will be featured throughout the three-hour TUDUM event — including some of our most popular returning series like Stranger Things, Bridgerton and The Witcher, to La Casa De Papel and Cobra Kai, as well as blockbuster films like Red Notice, Don’t Look Up, Extraction, The Harder They Fall, The Old Guard and more.

Fans will be the first to hear breaking news and see first looks, new trailers and exclusive clips during interactive panels and conversations with creators and stars from Netflix.

Visit TUDUM.com for the latest news and information.