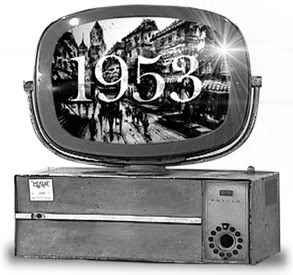 Television was introduced in the Philippines in 1953 with the opening of DZAQ-TV Channel 3 of Alto Broadcasting System in Manila. The station was owned by Antonio Quirino, the brother of the incumbent Philippine president, who was set to run for re-election the following year. The station operated on a four hour-a-day schedule (6 – 10 p.m.) and telecast only over a 50-mile radius. This television station was later bought by the Chronicle Broadcasting Network which started operating radio stations in 1956. CBN was owned by the Lopezes who were into various business concerns. The acquisition signalled the birth of ABS-CBN Broadcasting Network, now considered one of the major broadcasting companies not only in the Philippines but also in Asia.

The Lopezes also owned The Manila Chronicle, a leading daily at that time. ABS-CBN therefore became not only the first radio-TV network in the Philippines but also the first cross-media entity owned by a family — a situation which remains until today. Subsequently, the Lopez group added a second station, DZXL-TV 9. By 1960, a third station was in operation, DZBB-TV Channel 7 or Republic Broadcasting System, owned by Bob Stewart, a long-time American resident in the Philippines , who also started with radio in 1950. The first provincial television stations were established in 1968 in Cebu, Bacolod, and Dagupan by ABS-CBN. The network is supplemented by 20 radio stations located nationwide.

Economic constraints during these early years of television forced a dependence on imported programs from three U.S. networks ABC, CBS, and NBC. Importing programs was cheaper than producing them locally. In addition, canned programs appeared to be more popular among local audiences, even though initiatives were made in educational programming.

The commercial thrust of Philippine broadcasting has made it unique among other East Asian countries, where the electronic media are controlled and operated by the government. While this free enterprise environment made local broadcasting globally competitive, the same environment made it difficult to produce and broadcast public service and “development” oriented programs.

Philippine television‘s early dependence on US programs may be partly responsible for “colonial mentality” that has continued to afflict Filipinos during the past several generations. The commercial orientation of TV also engendered a “that’s entertainment” mentality in both the advertisers and the general public.

The 1994 Functional Literacy, Education and Mass Media Survey reported that about 45 percent of total households nationwide have access to television sets and that household population aged 10 years old and over exposed to television reaches about 57 percent.

Satellite and cable technologies have virtually made universal access to broadcast media possible. For example, ABS-CBN television reaches approximately 90 percent. The network is linked with the Pan American Satellite (PANAMSAT), which provides its programmes to all cable operators and direct-to-home markets within the satellite’s footprint. Through a cable television system, it can reach Filipino communities in the San Francisco Bay Area of the United States. Similarly, GMA Radio Television Arts Network reaches the entire country through its 30 stations nationwide. Filipinos in Southeast Asia, Hawaii, Guam, Saipan, Canada, and the United States can tune in to GMA-7, either through Mabuhay satellite or cable television systems.

Until recently, UHF television broadcasting was unheard of. Only those who could get access to the Far East Network of the U.S. Armed Forces Radio and Television Service, beamed to the U.S. bases in Clark Air Base and Subic Naval Base, were familiar with the bandwidth. Southern Broadcasting Network (SBN Channel 21) and Molave Broadcasting Network (Channel 23) were the first commercial stations to broadcast on the UHF band in mid-1992. SBN 21 features “global-oriented” programmes from the World TV, a local VHF channel, while Channel 23 carries MTV programming as received via satellite from Hong Kong’s Star TV.

The most phenomenal growth, however, has been in cable television. The growth of early cable television, introduced in 1969, was stunted during the Marcos regime, because of a decree granting exclusive franchise to a business ally of the former president to install and operate cable TV nationwide. This decree was abolished by President Aquino in 1987. The introduction of satellite programming by TV networks ABS-CBN and GMA in 1991 spurred interest in cable television. Provincial community antenna TV (CATV) systems have been set up to receive broadcast signals from stations originating in Manila. Metro Manila is now one of the most advanced urban centres in Asia with respect to cable TV, where two major cable systems, Skycable and Home Cable, offer 60 channels or more.

The Future of Philippine Television 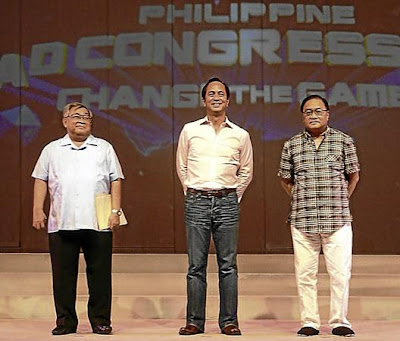 Competition and technology revolution are among the most certain things to happen in the TV industry. There will be stiffer competition not only among the VHF/UHF stations but with the so-called “new media” particularly cable television, direct broadcast satellite (DBS) and the Internet. Cable TV will affect regular free TV in terms of audience and advertising revenue. While free TV channels are available in cable TV stations, there is an increasing number of cable TV subscribers nationwide. Considering the far too many regular TV stations already competing for a dwindling advertising pie, the entry of cable TV further reduces the pie. Competition with DBS and Internet is not yet fully felt as subscriptions to these new media are still limited.

But experiences from advanced countries also show that the introduction of cable TV, Internet and DBS has not significantly affected the number of free TV viewers nor the number of hours spent on watching TV. Changes in programming (more local programs) and technology have made TV competitive.

Digitalization will revolutionize the television industry. Digital technology introduces high-definition television (HDTV) and allow broadcasters to integrate into one as many as six analog channels. The number of TV channels will be almost limitless. It will also make TV programming accessible to computers or what is called “compu-viewing.” Some predict that “PC is the future of broadcasting.”

The digital system will result not only in clearer and better signals but also allow for convergence in technology broadcasting, cable, telecommunication, and computer services. Thus, on the same monitor, the media user can watch TV or movie, send e-mail messages, perform banking transactions, listen to quality music, publish an e-newsletter, buy groceries, videoconference, to name a few.

The three Giant Television Networks in the Philippines 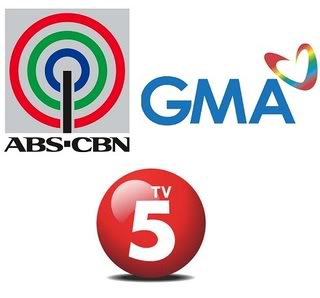 GMA Network (GMA) is a major commercial television & radio network in the Philippines. GMA Network is owned by GMA Network, Inc. a publicly listed company. Its first broadcast on television was on October 29, 1961, GMA Network (formerly known as DZBB TV Channel 7, RBS TV Channel 7, GMA Radio-Television Arts then GMA Rainbow Satellite Network) is commonly signified to as the “Kapuso Network” in reference to the outline of the company’s logo. It has also been called the “Christian Network” which refers to the apparent programming during the tenure of the new management, which took over in 1974. It is headquartered in the GMA Network Center in Quezon City and its transmitter is located at Tandang Sora Avenue, Barangay Culiat also in Quezon City.

The Associated Broadcasting Company, Inc (now TV5) is a television network in the Philippines, with main broadcast facilities and transmitter located at 762 Quirino Highway, San Bartolome, Novaliches, Quezon City. The network was previously known as the (ABC-5), Associated Broadcasting Company remains the legal name of the network. It is the third-oldest television network in the country and owned by MediaQuest Holdings, Inc., which is a fully owned subsidiary of PLDT headed by businessman Manuel V. Pangilinan.

The battleground of television network companies has always been a unique one. They fight with TV series, sitcoms, and news programs that attract viewers rather than products that they directly sell to consumers. The source of revenue is advertisement time interspersed within programs, with the cost of an ad segment determined by how popular the show is. Thus, the product is advertising time sold to advertisers, but this is only half the story—as a second product, shows are marketed to viewers for free.

In the Philippines, in practice, the terms network, station and channel are used interchangeably as programming line-ups are mostly centrally planned from the networks’ main offices, and since provincial/regional stations usually just relay the broadcast from their parent company network’s flagship station (usually based in the Mega Manila area). Hence VHF networks are sometimes informally referred to by the channel number they are seen on terrestrial TV in the Mega Manila area (e.g. Channel 2 or Dos for ABS-CBN, Channel 5 or Singko for TV5, and Channel 7 or Siyete for GMA Network) while some networks have the channel numbers in their name (e.g. TV5, Studio 23 and Net 25 which are seen on channels 23 and 25 respectively).

In Metro Manila, SkyCable, Global Destiny Cable and Cablelink are the primary cable operators. SkyCable also has provincial affiliates, which carry the former’s brand and programming may vary from the one provided in Metro Manila. In 2006, digital cable was launched. This not only made additional channels possible but also pre-paid cable service. Both companies also offer cable internet where cable television is bundled either free or at a discount. Besides cable, direct-to-home satellite is offered through Dream Satellite TV, Cignal and G-Sat and has pre-paid variants as well. Mobile and internet TV may also offered such as WatchPad, MyGMA, TFC Now, Sandbox, myTV and iWanTV.