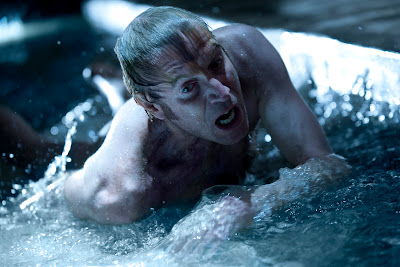 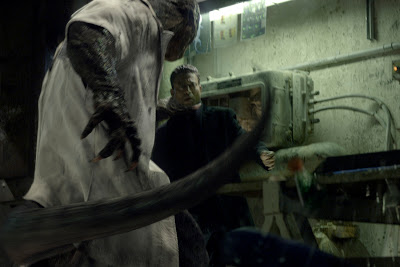 A giant reptilian powerhouse with superhuman strength, jagged claws and fangs, and a prehensile tail which can be used as a weapon, The Lizard is the alter-ego of the tragic scientist, Dr. Curt Connors, the world’s foremost authority on genetic engineering. Which may prove useful, as Connors is consumed with one particular quest above all others: to, somehow, find a way to regrow the right arm that he lost in an accident years ago.

And when he teams up with the brilliant budding young scientist, Peter Parker (Andrew Garfield), Connors finally finds a formula that works, including the DNA of reptiles. His joy at regrowing his missing arm doesn’t last long, as Connors slowly finds himself transforming into The Lizard, the vicious, twisted , scaly-skinned Hyde to his mild-mannered Dr. Jekyll.

Peter’s last link to his father is Dr. Connors, his father’s former partner and the only man who might have some insight – not only into what happened to Peter’s father, but into why Peter’s life turned out the way it did.

However, as producer Matt Tolmach notes, the connection between Peter and Connors goes beyond the scientist’s relationship to Peter’s father. “They are both incomplete, one physically, one metaphorically,” he explains. “Connors is an incredible character – there’s something compelling and quite tragic about him. He becomes blinded by his own condition and to the repercussions of what it is that he’s trying to do, and that makes for great drama.”

“The Lizard, a manifestation of Dr. Connors’ desire to fill a void, is one of my favorite Marvel villains of all time, because the character’s story is about loss,” says producer Avi Arad. “His alter ego, Dr. Connors, is a brilliant scientist who is totally consumed with the field of cross species genetics and regeneration, desperate to regain his missing right arm.”

“To me, the thing that sets the Spider-Man villains apart from other comic book villains is that they’re human, and real, and flawed, as much as Peter Parker is,” Ifans says. “Particularly with Dr. Curt Connors, what makes him a more emotional presence in Peter’s life is that he was very close to Peter’s father. That makes Peter’s relationship with him a very complex and emotional one.”

Ifans was drawn to the film by its complexity and the emotional elements of the role: “Connors is not a villain as such, and I’m not portraying him as a villain. He does feel kind of cheated by God, and he’s looking for answers in science. He is a man with genuine needs and anxieties. There’s a palpable pain and pathos to him, and when he crosses the line into self-experimentation, the true tragedy begins.”

Ifans prepared for the role by learning how to live as a person with one arm – becoming quite skilled at tying a tie, making coffee, and many other tasks with his right arm tied behind his back. “It’s a real revelation to discover to what level that a disability can affect a person, but also how it can actually make you more deft than a person with both arms,” says Ifans.

Opening across the Philippines on Friday, June 29 in IMAX 3D, Digital 3D, 2D and regular theaters, “The Amazing Spider-Man” is distributed by Columbia Pictures, local office of Sony Pictures Releasing International. Visit http://www.columbiapictures.com.ph for trailers, exclusive content and free downloads. Like us at www.Facebook.com/ColumbiaPicturesPH and join our fan contests.