Search
Menu
Search
Kapuso actor Dominic Roco admitted that he and his dad, award-winning actor Bembol Roco, are still not in speaking terms with each other after the latter admitted that he has a new woman in his life. 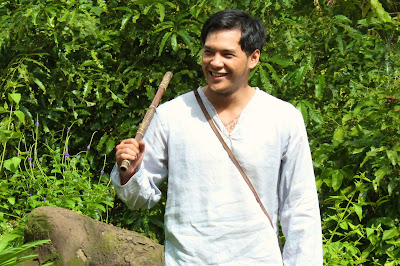 Dominic, however, clarified that he is past the anger he once felt toward his dad and that the only reason why they are not talking is because there isn’t anything left to talk about.

“It’s not because of my pride, I’m past that already.  In fact, last Christmas, we visited him.  Pero when we visited him parang iba na e.  When I talked to him parang, ‘Ano pa ba ang puwede naming pag-kuwentuhan?,’ explained Dominic.

“A lot of people think na, ‘Ang yabang naman nitong si Dominic Roco binabalewala lang niya ang tatay niya.’  I mean, I love my dad but what else can I do?  The damage has been done.  All I can do is to accept kung ano ang meron ako ngayon e.  I just want to make it clear with the people na hindi ako mayabang, I love my dad pero wala na talaga e.  There’s nothing to talk about,” he added.

Dominic is contented with the current status of his relationship with his dad.

“I already said to the people how I felt before.  Right now, I feel totally different.  Wala na talaga e.  He’s happy where he is, I am happy where I am right now.  Let’s just leave it at that,” he said.  “I am 23 years old and I have to move on kahit papaano.  All I am concentrating on right now is making my mom happy.”

The failure of his parents’ union has certainly affected Dominic’s view of marriage.

“Honestly, because of what happened to my family, I am not thinking yet about getting married.  I mean, I am not being cynical about marriage.  It’s just that I don’t think of it right now,” shared the actor.

Notwithstanding his family problems, Dominic has kept himself focused on his work.  He is part of the GMA primetime series “Indio,” in which he acts alongside industry veterans like Michael de Mesa and the lead star Sen. Bong Revilla, Jr.

It is Dominic’s first time to work with Sen. Bong Revilla, Jr., whom he so admire.

Apart from “Indio,” Dominic is also very active in the independent film scene.

Last year, Dominic expressed his disappointment to the press over how his career had been handled by his agent, GMA Artist Center.  Asked whether he has patched things up with the talent management company, he said that the issue had long been settled already.

“I was open to the public naman about the issue.  I mean, I told everyone how I felt, which I think is just right.  I believe I have the right to say how I feel naman e and after what happened everything became better, mas natutukan ang career ko.  I guess it was just about time that I had to say something and sakto ‘yung timing. Now, I am proudly an Artist Center Talent,” declared Dominic.  “I am happy with what’s happening with my career and with what Artist Center is doing for me right now,” he continued.

The handsome actor is surprisingly single for more than a year now and so, he’s “date-less” – romantically speaking — on Valentine’s Day.

“Ako, I just spent my Valentine’s Day with my mom lang.  Kasi wala naman akong girlfriend for more than a year or two na,” he admitted.

Asked whether work interferes with his love life, Dominic said that it is more his “pickiness” than his busy schedule that is the reason behind his being single.

Dominic said that when it comes to love, he doesn’t play around.

“I don’t want get into a relationship that fast.  I just want to treat every girl how they should be treated and I can do that naman with everyone. Siguro I am just looking for someone really special,” said the actor.

So what qualities does he look for in a girl?

For Dominic, it doesn’t really matter whether the girl is from show business or not, although he prefers a non-showbiz girl.

Dominic and his twin brother Felix have always been compared with each other ever since they entered show business.  Is there a competition brewing between the two?

“Ever since naman, we have been okay; we never fought.  We have always been compared with each other but we never really looked at it as a competition; we looked at it as a personal challenge lang.  If, for example, my brother gets a good project, I want to compare that project with mine.  Wala lang, parang nagtatapatan lang kami but it’s only a friendly competition naman.  It will make us grow as actors,” said Dominic.

Dominic portrays the character of Tuhay, an antagonist native (indio) who pledges his loyalty with the Spanish conquistadores.  In the end, however, he falls in love with a fellow native, a woman named Mayang (Sheena Halili).

How will Tuhay and Mayang’s love affair change the course of their lives?  Find that out on “Indio,” which airs weeknights (Monday to Friday) after “24 Oras” on GMA Telebabad.