Trance” introduces us to Simon (McAvoy), a fine art auctioneer, who teams up with a criminal gang to steal a Goya painting, a work of art worth millions of dollars, but after suffering a blow to the head during the heist he wakes to discover that he has no memory of where he has hidden the painting. When physical threats and torture fail to produce answers, the gang’s leader Franck (Cassel) hires hypnotherapist Elizabeth Lamb (Dawson) to delve into the darkest recesses of Simon’s psyche. As she digs deeper into his broken subconscious, the stakes become much higher and the boundaries between desire, reality and hypnotic suggestion begin to blur and disappear. 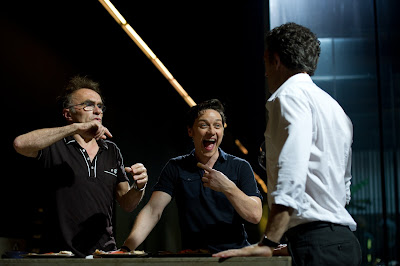 “After “Slumdog,” producer Christian Colson and I were looking for new work to do together and I told him there were a couple of ideas I’d always been drawn to: the Aron Ralston story – which became “127 Hours” – and this mad thriller called “Trance,” recalls Boyle.  “It felt like it would be perfect material for John Hodge.  Boyle worked closely with screenwriter John Hodge — with whom he collaborated on “Shallow Grave” and then on the acclaimed and shocking black comedy about Scottish junkies, “Trainspotting” — on a screenplay that melds dangerous seduction and electrifying action in a suspense filled spiral.

In tackling the material, Boyle saw a chance to update classic film noir themes – betrayal, moral uncertainty, sexual tension and the lurid instincts that seem to lurk beneath every human’s skin into a modern context.  He was also excited to bring a fresh take to the iconic femme fatale, with the character of Elizabeth Lamb, the beautiful hypnotherapist who proves to be every bit the equal of the men playing power games around her.

As Boyle and Hodge began writing and updating the classic film noir themes such as betrayal, moral uncertainty, sexual tension and lurid instincts, they knew this story could not be constructed with a conventional, linear plot-line but demanded a kaleidoscopic structure revolving around McAvoy’s character, Simon.  They plunged deep into the disoriented, broken mind of a character who not only cannot remember where he left the stolen Goya . . . but also has no idea what so urgently impelled him to hide it in the first place. They designed a web-like narrative in which Simon’s hypnosis sessions start to blow apart his very concept of who he is, and how he came to be in this situation.

Hodge continues:  “Danny and I wanted to have a kind of constant uncertainty for the characters as to what the truth is.  These three characters have to rely almost exclusively on what the others are saying or doing in order to figure out what’s going on.  And of course, pretty much everything that the others say or do is either a lie or a manipulation or unreliable in some way.  So, the protagonists are trapped in a puzzle of their own making. The challenge for them — and the fun for the audience – is to try and solve that puzzle.”

Most of all, Boyle and Hodge loved the idea of having three strong characters who at various times might appear to be either very good or very bad.    “The story’s got three excellent parts in it and they battle for who’s at the center of the film,” comments Danny Boyle.  “That triangle is a lovely dynamic to have in place as you can play with the question of which character the story belongs to.”