Menu
Search
Kapuso hunk actor Aljur Abrenica has vindicated himself from his bashers’ and critics’ taunting about his acting skills when he delivered very exceptional acting in last Saturday’s episode of “Magpakailanman” in which he portrayed the life story of a macho dancer. 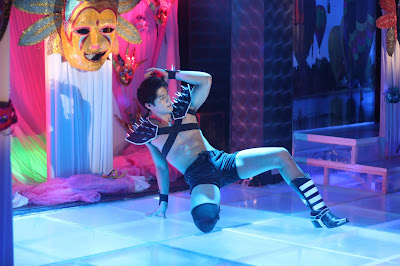 The episode won in the overnight household ratings against “Maalaala Mo Kaya” in viewer-rich Mega Manila (25.8% vs. 19.3%) based on data from the Nielsen Television Audience Measurement (Nielsen TAM). Aljur, who was pitted against kapamilya network’s Enrique Gil, seemed to have the edge over his counterpart acting-wise and abs-wise (!).

@iamjordman tweeted “Aljur ABrenica deserves an award after his great performance in #Magpakailanman. Best ACtor awards are next!”

In the episode, Aljur played the role of Kristoffer King, an independent film actor who resorted to stripping and prostitution during his life’s darkest moments. Kristoffer had everything in life but when his breadwinner mom died, his life began to spiral downward. Not long, a wrong set of peers and unhealthy vices led him astray and left his life a mess.

Adding to his troubles, Kristoffer became a father at a young age. Since his part-time job as a back-up dancer couldn’t foot the bill, he accepted an offer by a gay bar owner to become a male stripper thinking that it will only be “temporary.” Unfortunately, his son developed a serious genetic disease called Hunter’s Syndrome, and so Kristoffer needed a better paying job to sustain the child’s life-long treatment. Desperate and feeling helpless, Kristoffer used his chiselled body and good looks to earn more – as a high-end male prostitute.

Just as Kristoffer thought he’d be a manwh**e for life, a rich matron offered him a ticket out of the moral dung heap — plus a Green Card — in exchange of being her husband. Although it seemed like his much awaited silver lining, it had a catch: Kristoffer will have to leave his ailing son behind. Being the good father that he is, he rejected the offer and chose to be with his son through and through.

Talking about the role, Aljur Abrenica said in an interview with the entertainment website PEP.ph that he found the macho dancing part a bit of a challenge since he is not used to “sensual” dancing. “Bago po talaga sa akin itong pagma-macho dancing dahil kadalasan, kung sumasayaw ako, hip-hop, ganyan. O iba pang klaseng genre ng sayaw,” he said to PEP.

Aljur continued that he even asked his friends if they could recommend someone who dances in a gay bar to choreograph him. He was also given by the production team a list of movie titles to watch so he could get some pointers on how to do it.

His efforts paid off in the end since it seemed that viewers really enjoyed – or to sound less titillating, “appreciated” – Aljur’s performance, which they got for free in the comfort of their homes and without the need for a tip!