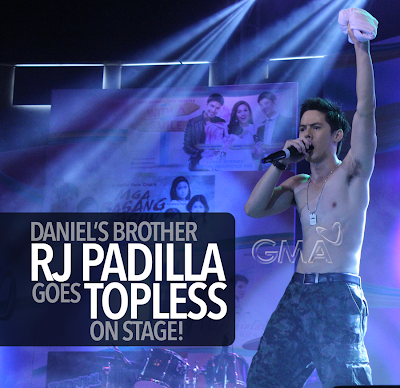 After Daniel Padilla, another member from the Padilla clan of actors is finding his way into the world of show business, and with his stance and manner of speaking that is typical of a “Padilla,” he is starting to show signs of being the next “Bad Boy of Philippine Television.”

Showbiz newcomer RJ Padilla is Robin Padilla’s nephew and Daniel Padilla’s half brother.  He is the son of Rommel Padilla, elder brother of Robin and Bebe Gandanghari. 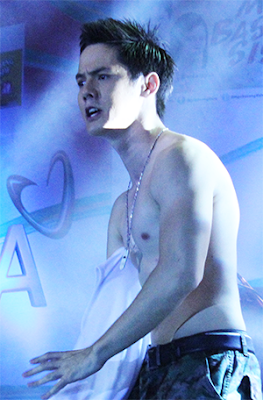 Recently, the 24 year-old kapuso actor astounded the audience at a regional show in Batangas City when he unexpectedly took his shirt off in the middle of his production number.  Members of the audience screamed at the sight of RJ’s – take note — six pack abs!

In an interview after the event, RJ revealed that he did not plan to flaunt his chiselled torso but when he saw how encouraging the audience was, he decided to push his limits further and gave them one hell of a show!

Asked whether it won’t bother him to be branded as the “Justin Beiber of the Philippines” after his “going shirtless” act, he brushed off the idea saying that his half brother, Daniel Padilla, is better suited for the title.

The young actor started serious workout when he was 20.

A lucky audience member also went home with RJ’s necklace and a kiss on the cheek, while another one with the actor’s tank top.

RJ is one of the stars of “With A Smile.” He feels blessed to be given such a big break by GMA Network, which gave him the opportunity to act alongside lead stars Christian Bautista, Mikael Daez and Andrea Torres.  RJ is also one of the final 10 new members (or ‘Bagong Gang’) of the longest running gag show in the Philippines, “Bubble Gang.”