Asia’s Songbird Regine Velasquez-Alcasid expressed her frustration and disappointment to her fans after they demanded the Rising Star Morissette Amon to not share the spotlight with her.

This happened after their performance in the ‘ASAP Natin ‘To’ where Regine and Morisette together with young singers sung the veteran’s music hit  ‘Pangarap Ko ang Ibigin Ka’.

After the moment that the stars shared on stage Regine expressed her admiration to Morisette saying, “I just want to say — you own this song, and I’m happy that you’re singing it, because it’s giving another life to the song. Wala na akong magagawa sa kantang ‘yan, so it’s yours. Thank you for singing it.”

The ballad song was a personal favorite of Regine, aside from it being one of her iconic recordings it was also a song made by his husband Ogie Alcasid where she was his inspiration behind it.

A clip of their song number then went viral and netizens start reacting on their performance, some showed their love for both the artists but some went over the line that Regine had to take a direct response to it.

In a tweet Regine’s hardcore fans showed their over protection for the singer by targeting Morissette stating that she does not deserve to sing the songbird’s song, they even tagged Morissette in the tweet. 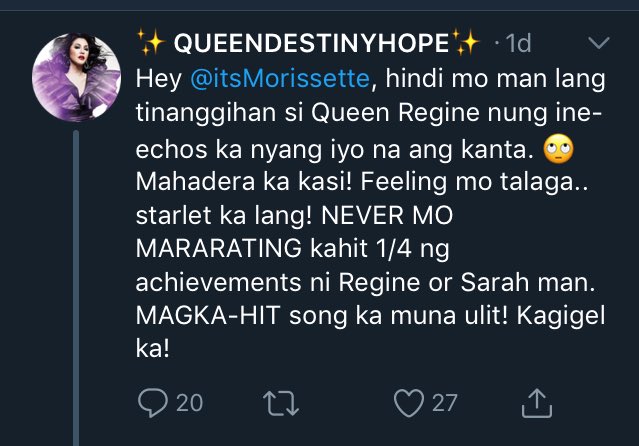 Even though Regine was not tagged in the rant it still appeared to her attention, triggering her to post a series of angry tweets in her account. The fans twitter account was made private letting her not be able to comment on the post but it didn’t stop her from expressing her sentiment to her fans.

According to ABS-CBN News in the post she commented, “Guys, what’s wrong with me giving the song to her? That song will always be mine but the truth is hindi ko naman mare-record ‘yun at wala na akong magagawa du’n. Ba’t ba mas marunong pa kayo sa ‘kin?”

“I want her to record the song so the new generation will know the song. It will have a new life. She will definitely own it siyempre, because that’s what we do. Ako, ‘pag kumakanta ng songs ng ibang tao, hindi naman sila nag re-react ng ganyan. I happen to love this girl because I think she is so talented. Utang na loob, ‘wag OA!,” she said.

Regine appeared to be irritated by followers who are telling her that they are upset by her gesture of giving Morissette her blessing to own the song. She was so annoyed that she also posted her sentiments in her account.

It’s not protecting me pinapahiya nyo

Regine letting her frustration out made some of her followers calm her down and showed her that she does not deserve that kind of bitterness.

Kalma😂 i- boom panes yan! But kidding aside, this is what fanaticism do. I like how you stand for what you believe is right even if that means going against to the will of your so called supporters. Not all celebs have that guts for fear of getting infamous. Thank you for that👌

I respect you Ms. Regine as one of the foundations of OPM. Thank you for your blessing and support to Mori. Filipinos should support OPM artist. Too bad that there are bitter people roaming around spreading hate. Philippines do not need them.