Film Development Council of the Philippines chair Liza Diño was criticized by netizens saying that her post regarding Netflix’s acquisition of fifteen Filipino films was misleading.

Dino’s post was however edited to include local distributors or production houses as the ones who engaged Netflix, unlike the original post where it didn’t mention the role of local producers but instead only mentioned FDCP and its relationship with Netflix.

“I was just informed by NETFLIX ASIA that fifteen (15) new Filipino titles have just been acquired by the company to stream on the NETFLIX platform starting this AUGUST.

“Staying true to their commitment to bring more Filipino content to the service, the content provider is announcing new films from Viva Communications, Regal Films, TBA Studios, The IdeaFirst Company, and CleverMinds. This new lineup cuts across multiple genres have something for everyone.”

“FDCP has maintained a very good relationship with NETFLIX since 2017 and has been partnering on many initiatives from policy discussions, distribution of Filipino films to capacity building programs like Post-Production Workshops to elevate the level of filmmaking in the country.

Many netizens were alarmed that FDCP seemed like they were taking all the credit.

Even Director Erik Matti was disturbed by the misleading post as he mentioned that he was made to think that FDCP may actually be doing something good to the movie business.

For a brief moment, he felt guilty about why he was so hard on the film agency until he read articles never mentioned that FDCP was the one who brokered the deal.

Matti mentioned that Dino’s post contains statements with a double meaning that can easily be taken back when questions regarding it arise.

“This post by FDCP looks misleading. I read the article and nowhere was it mentioned that FDCP brokered the deal on behalf of the films. In fact, there was no mention of FDCP anywhere in the article. But FDCP Chair Liza Dino’s post, as read, was written to hint that it was through FDCP’s efforts that the Netflix deal happened for these producers. It’s the kind of ambiguous double speak that’s common nowadays not just with our government but also in the Trump empire. A double speak that people saying it can easily take back if and when questions arise regarding the veracity of the statements made,” said Matti.

“Judging from the comments on the post, most were congratulating FDCP on this deal and how the movie industry isn’t recognizing the help FDCP gives us. But without the FDCP clarifying that ‘by the way, we are not the one who closed the deal. We are just proud of our producers and filmmakers.’ in the comments below, their office hints even further and sort of silently affirm that they are indeed part of the acquisition,” Matti added.

Local filmmakers also decided to speak up regarding the issue. They explained that they worked hard in sealing the deal with Netflix themselves.

They said that they were able to find contacts on Netflix on their own and establish a good relationship with the company throughout the years.

They also said that they even went to Netflix personally to pitch their catalog and made all the negotiations in presenting their studio’s catalogs. 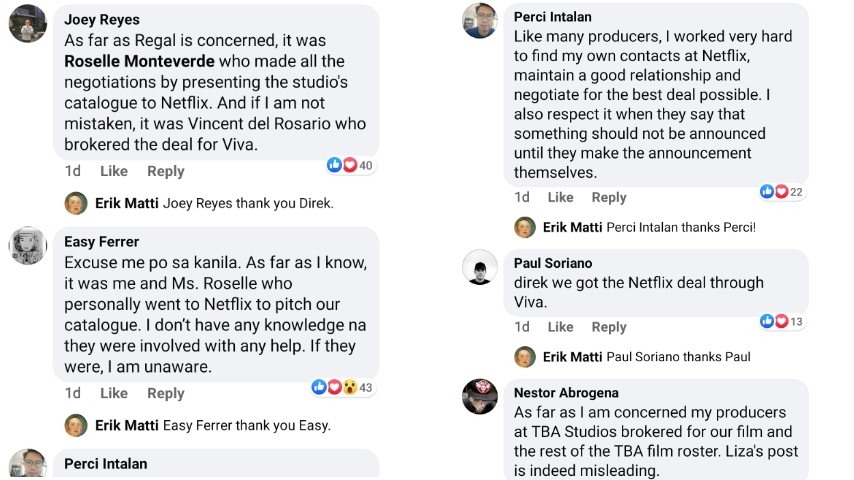 Dino was overwhelmed with various accusations and questions that’s why she decided to edit her Facebook post to recognize different distribution companies in engaging with companies like Netflix.

She added that “We are happy that our local distribution companies are continuously engaging with these international companies to expand their audience. With the world’s inevitable shift to digital platforms now even more expedited because of the pandemic, the local industry is adapting to the change.”

Liza Dino is a government official, former beauty pageant winner, and actress in the Philippines.

She earlier visited veteran actor John Regala whose condition she heard about.

Regala is suffering from liver cirrhosis. He has recently asked for help after a netizen posted a photo of him on social media where he looked frail and sick. One of the first ones to give him assistance was TV host Raffy Tulfo who pledged P100,000 cash.

Dino marveled at how fast showbiz personalities are giving out help for the beleaguered actor.

“It’s so incredible to see industry people come together to help one another in times like these. Kahit may kanya-kanyang priorities, basta sa panahon ng krisis, nandyan tayo para sa isa’t isa,” she said.

Dino described her meeting with Regala as “an afternoon well spent.”

“I got a call from kuya Reb Belleza to ask me to see Mr. John Regala so yesterday I visited him at his place to check on his condition and extend our support,” she stated.

“Since 2015, he has been under the care of Iglesia Ni Cristo where he is a member and up to now, they have been looking after his well-being,” she added.

She was happy to share that Kuya John is okay but he requires medical assistance.

“Arrangements were made to address his immediate needs, which includes regular visits by the doctor to provide him with IV fluids to keep him hydrated and nourished since his liver problem makes him lose his appetite,” she said.

Liza Dino played the lead in her first independent film Compound (2006/2010) directed by Will Fredo, which was nominated for best picture in the Golden Screen Awards and was shown in various international film festivals.

She subsequently appeared in the independent films Baliw (2006) by Redd Ochoa which competed in the Montreal Film Festival, Sinungaling na Buwan (2007) by Ed Lejano for Cinemalaya, Rome and Juliet (2007) under the direction of Connie Macatuno for Cinema One, and Sa Pagdapo ng Mariposa (2008) by Will Fredo.

She starred as the delusional Imelda Marcos in the short film Imelda and Gunter (2009) directed by Ramon Sanchez, which also did some festival rounds in the US and has shot commercials for KCAL insurance (2008) and 24/7 debit card (2011) with Manny Pacquiao.

On August 12, 2016, Diño was appointed by President Rodrigo Duterte as Chairperson of the Film Development Council of the Philippines.