PREMISE: Contestants try to make their way through the game’s three stages while trying to follow different restrictions set in every round.

‘BAWAL NA GAME SHOW’ is an interesting and fun show filled with exciting games, humor, and prizes. Hosts Paolo Ballesteros and Wally Bayola  keep their popular brand of comedy where they cross-dress to make the energy of the show even livelier.

BAWAL NA GAME SHOW is only one of the many new shows of TV5 that premiered this week. Its arrival comes very timely as audiences are getting tired of the reruns currently dominating the television landscape. Not surprisingly, the very theme and title of the show reflect what many of us are currently going through, because of the ongoing pandemic. The three stages of the game are inspired by the fact that our movements are largely governed by the many restrictions imposed by the government and that we are all trying our best to stay alive until the crisis is over.

The show has three segments, namely: ‘Bawal Ma Fall’, ‘Bawal Dumamoves’, and ‘Bawal Sablay’, each imposing a unique restriction that contestants need to follow. The contestants can only move on to the next stage when one player fails to follow the restriction and gets eliminated, with only one player to play the jackpot round for a PhP50,000 prize. If the jackpot player fails to succeed the round, he can’t say he is not lucky as he will still go home with half of the jackpot prize, or PhP25,000.00

It is not easy to make game shows vibrant and alive without audience participation. In BAWAL NA GAME SHOW, both Wally and Paolo are obliged to step up and make up for the void left by the absence of studio audience and based on the first two episodes, they’ve been very successful, so far.

Adopting their signature comedy style for the show, Wally and Paolo, who now call themselves the ‘Ghorl Twins’, will excite home viewers as they groom themselves like drag queens while keeping the humor of the show with their hilarious banter with each other and with the guest players.

As for game itself, the show can’t pretend it is not inspired by other existing or already defunct game shows, as each stage strikes similarity with other popular formats. Of course, the show tries to be creative by modifying them with a few tweaks and with little, if not too much, humor. And it works in the show’s favor. 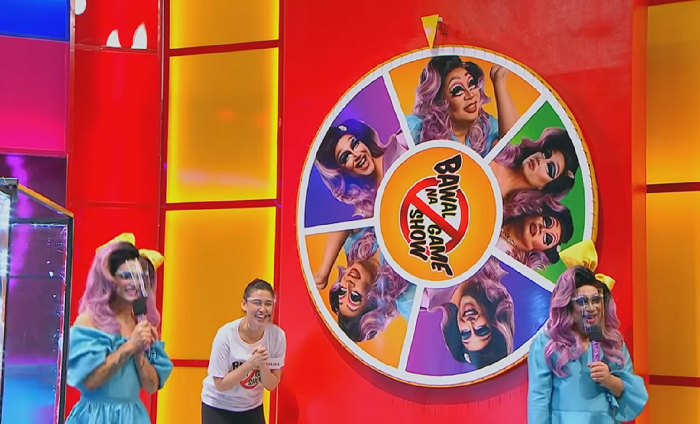 Since the show will tap different celebrities to play, its per episode-success will greatly rely on how interesting guests are going to be. It was a wise move to tap Kapamilya stars to play for its pilot week as most of their fans must have been struggling to find updates on them after ABS-CBN’s shutdown.

Overall, TV5 may have found a way to slow down television viewers migrating to online platforms －Netflix, Viu, iWant to name a few－and to long time industry leader ABS-CBN which has shifted to the digital space.