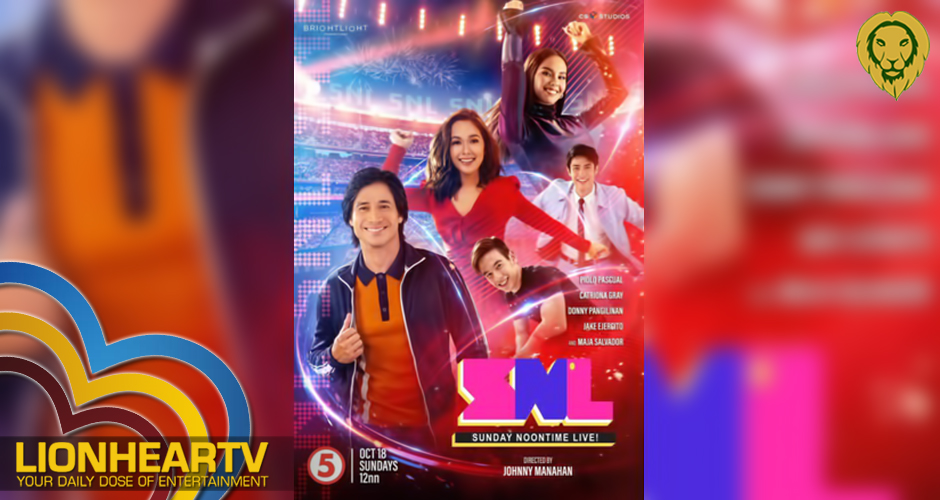 With Johnny Manahan at the helm, Sunday Noontime Live carries a brand that is almost unmissable by every musical variety fan.

After 25 years of lording the Sunday musical variety scene, it looks like long-time industry leader ASAP has finally found its legitimate rival with the arrival of TV5’s Sunday Noontime Live. And it isn’t a surprise － the key players responsible for the show are also the same ones who largely made ASAP successful.

Helmed by veteran stage director and star builder, Johnny Manahan, who is more popularly known as the ‘Mr.M’ of Pinoy showbiz, the Brightlight Productions-produced show features stars from ABS-CBN’s musical variety show, ASAP Natin ‘To, who were given freedom by the embattled media giant to work on other stations, following the Congress’ decision to kill its franchise application on July 10.

Among those big stars who joined Mr.M on TV5, include Star Magic’s Piolo Pascual and Maja Salvador, who both consider Manahan as a ‘father figure’. They are joined by Donny Pangilinan, Jake Ejercito, and Miss Universe 2018 Catriona Gray －all previously identified with the Kapamilya Network － as main hosts.

As expected, Mr. M’s stylistic imprints are very apparent in Sunday Noontime Live. Explosive opening numbers are among his trademarks, and during his TV5 show’s debut, his vision was again carried out in energetic dance and song prods led by the show’s mainstay hosts. Opening the show, Miss Universe 2018 Catriona Gray dazzled with her cover of Dua Lipa’s “New Rules”, followed by the equally explosive performances of Piolo, Maja, Jake, and Donny.

The Ultimate Vocal Showdown features up-and-coming young artists deemed to be future big stars. The ensemble comprises Idol Philippines Grand Winner Zephanie, Tawag Ng Tanghalan Year 1 1st Runner-Up, Sam Mangubat, The Voice Kids Finalist, Sassa Dagdag, BoyBandPH member, Niel Murillo and Idol Philippines Finalist Fatima Louise, who now calls herself ‘Fana’. For their pilot performances as a group, they paid tribute to the music of British singer, Sam Smith, and having hailed from singing competitions at ABS-CBN, each of them pulled off their best to deliver spectacular performances, although Mangubat and Dimaranan are no doubt head-and-shoulders over their group-mates, to be frank.

Dance Royalty Maja Salvador bared her dancing prowess in a sizzling dance number, which she shared with Maris Racal, Kokoy de Santos, Ricci Rivero, Claire Ruiz, Ashley Colet, and Jerome Ponce. Salvador seemingly found her own realm after years of performing in the shadow of Sarah Geronimo on ASAP, and on SNL she makes perfect use of it to prove she can handle her own kingdom really well. She was gorgeous, tantalizing, energetic and completely ‘savage’ in her ‘Savage Love’ performance.

Perfect for the rainy season ang sound trip with The Juans! #SNLWelcomeParty #TheJuans

Among the show’s biggest surprises was the guest performance by pop-rock band, The Juans. Performing their hit song, ‘Hindi Tayo Puwede’, which is a certified ‘hugot’ anthem, the band headlined the segment ‘JamPak’ with other Pinoy artists, including Janina Vela and Claudia Barretto. It was a generally fine production but it could have been much better － I mean, with better confidence and control from the performers. Good thing, the show had the emerging P-Pop group to make up for the slight mess they made.

The stars of I Got You, Beauty Gonzalez, RK Bagatsing and Jane Oineza! I Got You mamayang 2PM na right after SNL! #SNLWelcomeParty #BeautyGonzalez #RKBagatsing #JaneOineza

Lead stars of another Brightlight Productions show, ‘I Got You’ also graced the show’s premiere. Beauty Gonzalesz, Jane Oineza, and RK Bagatsing, all charmed in a production number, and later on promoted their new drama which debuted on the same day as SNL.

Volume and vibrance remain Mr. M’s major touchstones. He had the whole stage and set light up to lively colors, with lights exploding in dance numbers, and mostly tamed to dimmer tones in musical performances.

Having hosted ASAP for many years, Pascual and Salvador seemed to have gotten the drift of hosting with ease. Although admit it, there was an evident air of awkwardness among the hosts who were much more used to addressing their audiences as ‘Kapamilya’. At one point, we were all waiting for one of them to slip and accidentally utter the forbidden word, instead of ‘Kapatid’.

Sizzling dance numbers and powerful vocal showdowns are among musical variety show staples, which Sunday Noontime Live seems to have no problem delivering with dexterity, under Mr.M. However with the absence of veteran singers (who are mostly on ASAP) like Regine Velasquez-Alcasid, Martin Nievera, and Gary Valenciano, SNL still leaves a lot to be desired.

Yes, it has young singers and dancers heat up the show every Sunday noon, but ASAP Natin ‘To has a lot of them, too, and judging how the latter responded to the challenges presented by SNL, it seems that ASAP won’t allow a newbie player take the Sunday noontime crown, without giving one hell of a fight. The ensuing matches in the coming weeks look very interesting. And oh! Did someone ask what about the other Sunday noontime variety show with more comedians than actual singers and dance performers in it? The absence of such a show on twitter’s trending list, suggests we better leave it.