It is no secret that many people are disappointed that Miss Philippines Samantha Bernardo had an ‘almost win’ in the Miss Grand International 2020 when she settled as the first runner-up. 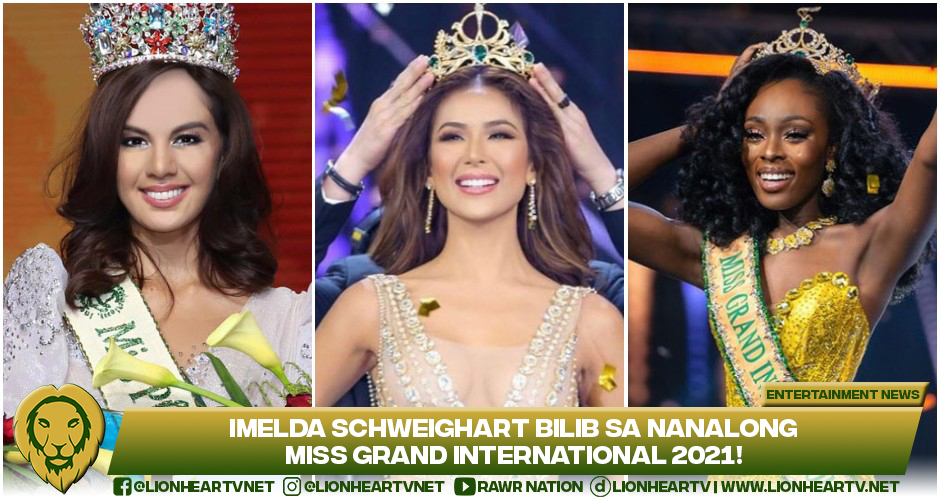 Some argue that Bernardo should have won, but Miss Philippines Earth 2016 Imelda Scheweighart disagreed on the views.

On the Filipino-Austrian ex-beauty queen’s facebook account, she believes that there was no “cooking show” or a ‘cheated’ result on the Miss Grand International 2020.

She also commended Miss USA Abena Appiah’s answer in the final question on the Top Three Question and Answer round — to whom will she give the last COVID vaccine, to a 15-year-old or a senior citizen was well versed.

“I’m in no position to state my opinion on this one, but there was no cooking show. Miss USA gave me goosebumps, authenticity, original pasarela, a diplomatic answer, and I think it’s well deserved.”

Looking back on her lapses in beauty pageants, she resigned from her reign as Miss Philippines Earth 2016 after losing to Miss Ecuador Katherine Espin in Miss Earth 2016.

After the pageant, a video of hers surfaced–insulting Miss Ecuador while speaking to her fans. Despite this, she clarified that she ‘knows how to win.”

“I am mere a national titleholder only and have consciously sabotaged my international stint because it doesn’t fulfill me. But I know how to win,” she said.

“My pageant skills and knowing is very much satisfied with the performance and the appearance of the winner. It’s raw yet tact and queenly. It’s so my style!!” she pointed further.

I’m in no position to state my opinion on this one but there was no cooking show. Miss USA gave me goosebumps,…

She also praised Abena for preparing the International pageant so well. Not known to everyone, Miss Grand International 2020 has also participated in other international beauty pageants.

The most recent of which was the 2019 Miss Earth pageant held in Manila. Appiah was Ghana’s representative at the time.

“Let’s talk about the vibe of her answers, I can hear my ancestors speaking to me. So, prepared with her speeches. Like a real queen.”

Imelda added that Miss Grand International (MGI) has leveled up because it has stopped choosing “fake-looking women.”

Look at that class ✨ #browngirlmagic

“This is the thing about performing art, you got to be it, and I think she would do well to represent the organization along with her advocacies. Miss Grand International has shifted from choosing fake-looking women to hiring natural-looking women as their ambassadress.”

On the other hand, Imelda is proud of the Philippine candidate Samantha Bernardo who didn’t just represent her city, but the whole country.

“Proud of Sam for representing not only Palawan but the whole country. She showed perseverance, grit, grace. I’m glad to have pushed her to join Binibini again.”