Mark Anthony Fernandez, 42, is happy and proud that his 19-year-old son Grae Cameron Fernandez has pursued a career in acting, a craft that he also loves. 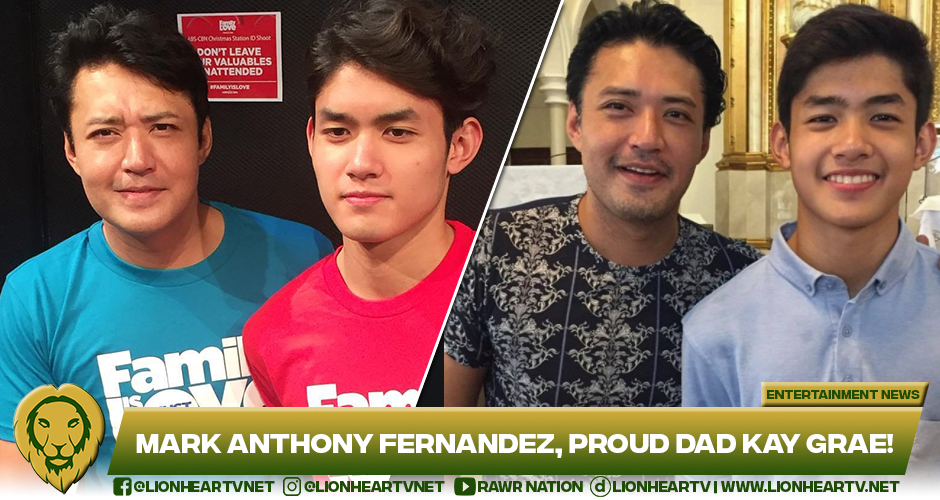 These were the words of proud dad Mark to ABS-CBN News over what his son had accomplished so far.

Grae first appeared on television for the Jollibee Summer Bucket Treats commercial in 2013.

He then appeared on ABS-CBN’s game show Minute To Win It, hosted by Luis Manzano, and joined the Star Magic’s teen boy-group Gimme 5 in the same year.

Grae began his acting career in August 2014 as cast member of “Perfecto,” an episode of ABS-CBN’s fantasy-drama, comedy anthology Wansapanataym, which aired every weekend.

The young actor made his film debut as one of the supporting cast in 2015’s The Love Affair, a certified box-office hit, starring Richard Gomez, Dawn Zulueta, and Bea Alonzo.

Grae has recently made a name for himself as an actor, having starred in the ABS-CBN primetime drama series “Ang Sa Iyo ay Akin,” which aired its finale last Friday night.

Mark, who got separated from Grae’s mother, Melissa Garcia, in 2014, gave his son some advice about show business.

Mark encouraged his son to keep working and to keep seeking out beautiful stories or projects. He believed that Grae would be able to find a role that would leave a significant impression on the public.

The actor also expressed his desire to collaborate with his son Grae on a biopic of former Senator Gringo Honasan.

“Can anybody convince a producer to buy the story rights of Senator Gringo Honasan?” he asked. “Maybe Grae can also be in it or I can be in it with Grae, that will be a big project for both of us. Kung maganda ang project, bakit hindi kami magsama? We really need a good project to work together. Alam ko mangyayari din ‘yan.”

Mark, whose parents were Rudy Fernandez and Alma Moreno, made his mark in his early 1995 films. He earned citations for best actor and best supporting actor in the films “Pare Ko” by director Jose Javier Reyes, “Mangarap Ka” by director Rory Quintos, and “Matimbang Pa sa Dugo” directed by Jose Carreon.

He was aware of the decline in his career and accepted it. He did films that flopped at the box office. After a career slump, he came back and revitalized his career, delivering one outstanding performance after another.

Mark plays angel Michael, who tries to kill the anti-Christ in the Lenten offering “Biyernes Santo.” Helmed by director Pedring Lopez, it will be streamed on VivaMax, beginning March 26. Lopez was known for his films “Binhi,” “Nilalang,” and “Maria,” which garnered 10 citations in the upcoming Star Awards for Movies.

Andrea del Rosario, Gardo Versoza, Ella Cruz and 14-year-old newcomer Via Ortega were among the cast members of “Biyernes Santo.” All of them were hand-picked by director Pedring Lopez.