The supposed AstraZeneca vaccines for Bicol’s healthcare workers were returned to the Department of Health on Sunday, March 21, after they had been packed in containers with defective thermometers.

AstraZeneca’s storing temperature should be 2 to 8 degrees Celsius. 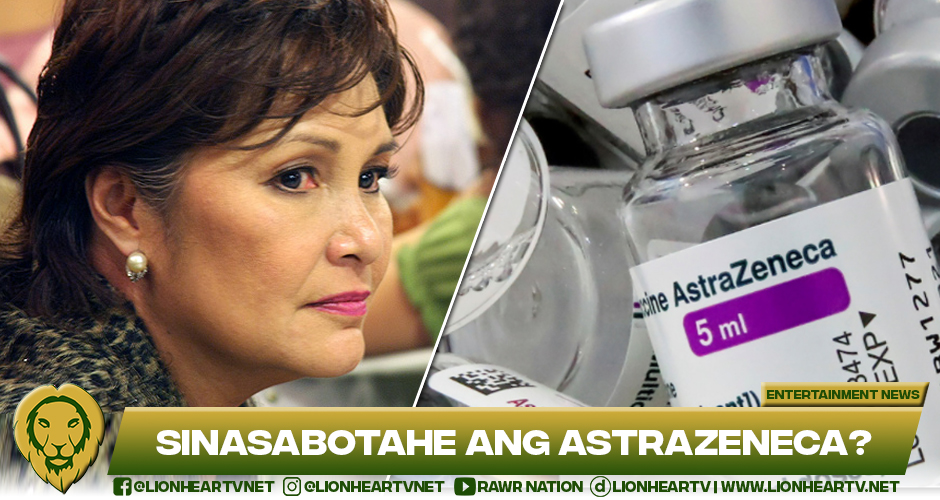 Noemi Bron, the DOH Bicol Public Affairs chief said that they returned the vaccines to the main office as the Bicol branch had no knowledge of whether AstraZeneca is still usable or not.

“The thermometer was defective, so we didn’t know if the vaccines were still within the allowed temperature which is between 2 to 8 degrees Centigrade,” said the DOH Bicol public affairs chief on Wednesday, March 24.

As a result of this mishap, several celebrities, personalities, and netizens have shared their opinion regarding the miscarriage of the vaccines.

Singer Leah Navarro criticized the government for not being able to transport AstraZeneca properly. Navarro also threw some shade at the administration for being inept.

Good grief. This govt can’t even transport vaccines correctly. Well, the Duterte govt is DEFECTIVE, after all. https://t.co/o88fczCzQf

With the unexpected return of the vaccines, Senator Nancy Binay probed on the freezer failure of AstraZeneca as 7,500 doses of the vaccine were potentially wasted, resulting in 7,500 people being denied the inoculation of the vaccine.

Former PBB: Connect housemate Justin Dizon was disappointed upon hearing the news that a large amount of AstraZeneca was potentially wasted over some faulty containers.

After the DOH hired a third-party logistics in charge of packing the vaccines, it resulted in AstraZeneca potentially ineffective against Covid-19.

As a result, a netizen was maddened about the incompetence of the government hiring a third-party logistics company to do the packing

Another netizen chimed in by saying that the government’s strategy in mitigating the spread of Covid-19 is to distribute vaccines such as AstraZeneca, yet they too failed at transporting it correctly.

Another netizen criticized the government as the procedure in containing the vaccines as part of the simulation that they prepared. The netizen also expressed their concern with the possibility that COVAX, the distributor of vaccines, would not provide the Philippines more vaccines due to mishandling.

While Presidential Harry Roque insisted that the Philippines has done an “excellent” job in containing the spread of Covid-19, the recent mishap in packing AstraZeneca has made a netizen proved that it was the other way around.

Moreover, the netizen was concerned about the consequence of the government’s improper containment of the vaccines—Bicol region’s healthcare workers are being delayed with the promised vaccines.

With AstraZeneca not being donated by China, Duterte’s ally, some noticed that it may be some sort of sabotage on the part of the more effective vaccine.

Blogger Richard Paglicawan shared his thoughts regarding the faulty containers. Paglicawan thought that something was fishy as only AstraZeneca doses were packed with a defective thermometer, rendering it possibly ineffective against the coronavirus.

A netizen likewise agreed that something is fishy. The netizen’s theory is that the government made it appear that the vaccines were contained in a faulty container in order to dispose of them.

Why does it feel like pinalalabas lang na nasira ang storage units at wala ng magagawa kung hindi idispose only to be used by politicians and those with connections later on? Bakit AstraZeneca lagi at hindi Sinovac? https://t.co/T2K7zecSNF

Meanwhile, the incident has caused the DOH to address the situation. According to the health agency, though they have not yet received an official report about the incident, their preliminary findings have shown that the vaccines still remain in usable condition.

“We have yet to receive the official report on this but preliminary findings show that the temperature device was faulty and the vaccines remain in usable condition,” said DOH in a statement.

The available vaccines in the Philippines are AstraZeneca, which was given by COVAX, and SINOVAC, the vaccine donated by China.