On May 25, hashtags #CongratsPresidentBBM and #NeverAgain became trending topics on Twitter as Ferdinand Marcos Jr. was proclaimed the Philippines’ 17th President. 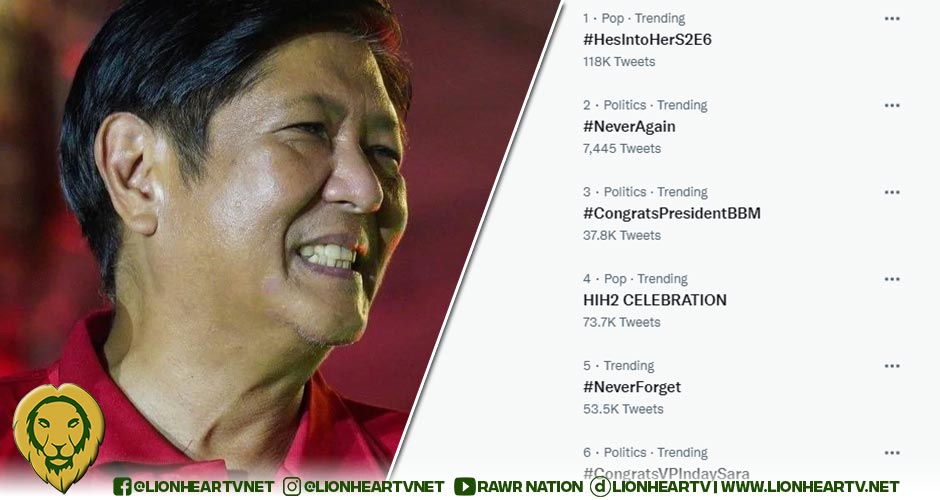 Marcos Jr. was officially proclaimed as the new President-elect during a joint session in Congress.

During the proclamation rites, the dictator’s son became a trending topic online as netizens shared their varied reactions regarding the results.

His supporters, including actress Dawn Zulueta, sent their felicitations to Marcos Jr. and wished him the best as he would serve the country.

They also celebrated the return of the Marcoses to power almost four decades after the ouster of Marcos Sr.

They finally returned 36 years after! Been praying for this day for the last 12yrs, finally it has arrived!
BANGON BAYAN MULI#CongratsPresidentBBM #CongratsVPIndaySara pic.twitter.com/oqIJ6VPQJ7

It took 36 freaking yrs, but now here we are. There really is Divine Justice. 🙏 #CongratsPresidentBBM ❤️✌️#CongratsVPIndaySara 💚👊

Other netizens also joined in making the ‘#CongratsPresidentBBM’ trend but with irony as they expressed their disappointment with the results.

#CongratsPresidentBBM this hashtag is bullshit lmao

@simonfraud stated that BBM supporters could not genuinely celebrate because they won due to disinformation and maligning Vice President Leni Robredo, Marcos Jr.’s biggest rival.

You can do all the trolling you want against Leni and those who speak against BBM, pero you still can't deny the fact that you installed someone based on disinformation and character assassination. That's why even if you won, can't sincerely celebrate. #CongratsPresidentBBM

@hellofranseth said that he would never celebrate the decision of the majority because it installed a President who is full of lies.

Congrats. I don't accept you as my president and I will be working hard to escape this country's impending doom. I am not being "nega", but rather realistic. I know the first priority of this administration will be how to fill their pockets with money. #CongratsPresidentBBM

@DeomarPandan feels ashamed as the Philippines is the only country where people trusted the son of a dictator.

Only in the Philippines do people elect the son of a dictator, who murdered thousands of Filipinos during Martial Law.

Until now, I'm still shriveling inside in shame.#NeverForget#NeverAgain

not everyone is like you, privileged enough to just disregard the atrocities marcos-duterte did.

@QuezonFm said that the youth tried hard to prevent another Marcos win, yet, the majority still chose him. Therefore, the country should be ready to face the consequences.

Tama nga kami. The youth tried to warn you many times, but due to disinformation and historical revisionism you still voted for the son of the late dictator, face the consequences. #NeverAgain #NeverForget pic.twitter.com/9WRrtnedqE

Marcos Jr. also mentioned that their priority is to clear their family’s name—proof that they are only after their own benefit rather than the whole Filipinos.

It was always about their name, never about public service, never about the concrete plans they wanted for the countrymen. #NeverForget #NeverAgain pic.twitter.com/Ku7wyoNZAy

why bangon bayan muli is trending here on twitter when marcoses said this? ano to‚ bulag bulagan? #NeverAgain pic.twitter.com/zv4Lv1FOyY

Sara Duterte, the daughter of outgoing President Rodrigo Duterte and running-mate of Marcos Jr., was also proclaimed on the same occasion.

Marcos Jr. earned 31.6 million votes or 58.77% of that ballot’s cast, leaving a huge margin against his rival Robredo who earned about 15 million votes. The recent election also had the highest voter turnout of 82%.