The 12-year-old Kapamilya noontime show saw its biggest live audience yet in two years, on its very first day of airing on TV5. 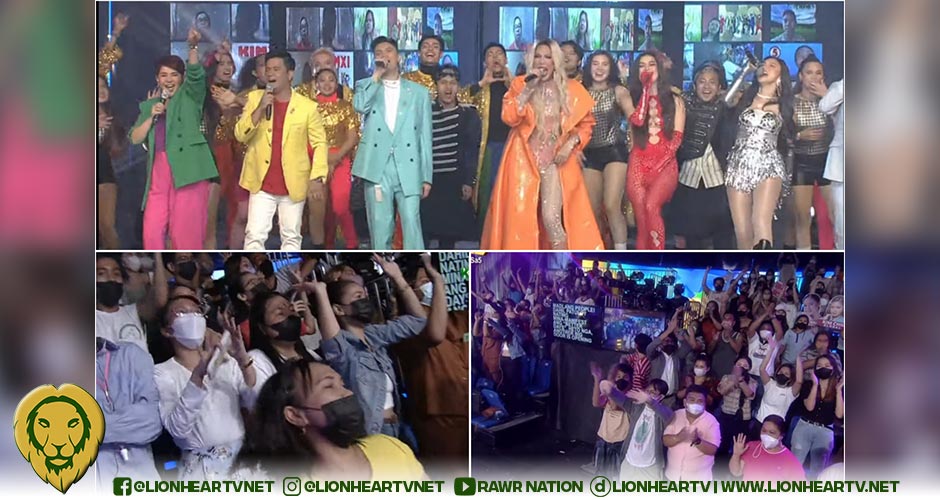 Utilizing ABS-CBN’s Studio 10 for its live airing on TV5 on July 16, It’s Showtime welcomed its biggest audience in the studio yet, in the last two years. It can be recalled that the noon time show, alongside many other local live productions stopped admitting audiences in compliance to government-imposed regulations and protocols. Last April, the noon time show allowed a limited number of studio viewers, during Vice Ganda’s  birthday celebration.

Live audiences, most of whom fans of Vice Ganda, Karylle, Vhong Navarro, and Anne Curtis, took part of the star-studded and explosive opening number, which featured the entire ensemble of It’s Showtime family. Shouting the famous “What’s up, madlang pipol” again in front of a live studio audience, the hosts, especially Vice Ganda, could not help but go mellow in realizing the show has been heading towards what the hosts have been dreaming to get to, since the pandemic started and the ABS-CBN shutdown.

The spacious Studio 10 regularly houses the Sunday noontime musical variety show, ASAP Natin ‘To. Its size allowed the show accommodate more live audiences than its previous studio could. A new set is reportedly in the works, to house the show in its upcoming episodes.

It is not clear yet whether the next episodes will continue to welcome live studio audiences, as they are still required to go under pricey tests, but it seems the show is headed to that direction. Of course, the warm reception from television and online viewers should only encourage the management to consider allowing live audiences in the studio for good.