South Korea’s rising star Hwang In Youp is set to come back in Manila for his 1st official fan meeting 2022 HWANG IN YOUP 1st Fan Meeting in Manila on September 24, 6PM at the New Frontier Theater. 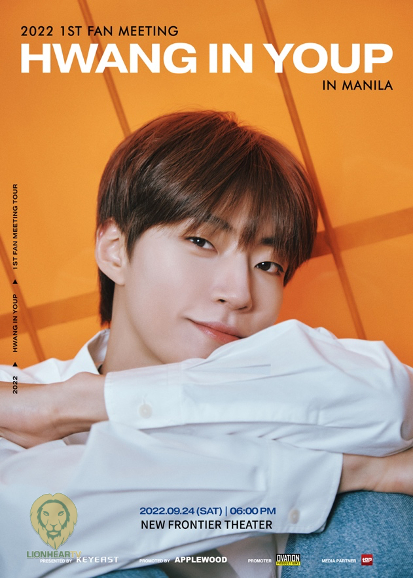 HWANG IN YOUP is a South Korean Actor who debuted in 2017 as a runway model before launching his acting career in 2018 with a lead role in Playlist Studio’s web drama . He has been steadily growing his acting career since then and his name rose rapidly after his performance as the beloved second lead, Han Seo Jun, in the drama adaptation of the highly popular webtoon, , which started airing in late 2020. HWANG IN YOUP recently strengthened his position as a trending young actor by leading Netflix’s series, , and , which finished its run last 23 July after 16 episodes.

Apart from the confidence that Hwang In Youp radiates with his icy yet warm charms, fans can expect a memorable night as the actor will have exclusive up-close interaction with them, will sing songs and lucky winners will even have the chance to get hold of his autograph during the fan meeting.

Proudly presented by KEYEAST, APPLEWOOD and OVATION PRODUCTIONS, Tickets to 2022 HWANG IN YOUP 1st Fan Meeting in Manila are on sale starting from August 22, 10am onwards at all ticketnet outlets and ticketnet.com.ph.