ABS-CBN and Star Cinema pay tribute to the 50 illustrious years in showbiz of the Star for All Seasons Vilma Santos through a one-of-a-kind film titled, “The Healing.” 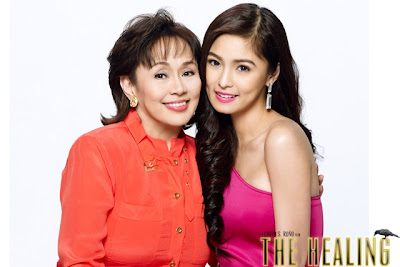 Vilma‘s 50th anniversary movie is equally monumental as this is her first-ever suspense-horror movie. “It’s a perfect project after ‘In My Life,’ which was three years ago. And since I don’t do movies that frequent, I might as well give the public something different,” said Vilma. “This is my first time to do a suspense-horror and I’m so proud of it.”

Governor Vi shared that she is so elated with the fact that she is working now with some of the entertainment industry’s best, including the Master director Chito Roño. “I’ve been asking for so long for something this and I’m so glad that it’s finally happening. With the undeniable top caliber of Star Cinema, Direk Chito, and our award-wining cast, how can I go wrong!” she remarked.

Vilma added that she is particularly excited with her first movie project with one of ABS-CBN‘s primetime princess Kim Chiu, “Honestly, Kim is a great actress and I can feel that her career will surely go far in showbiz,” she said.

True enough, “The Healing” is totally a new brand of suspense-horror that will surely make a mark in the Philippine horror cinema. “Stories about the Filipino tradition of going to faith healers for guidance and treatment of ailments have not yet been tackled in-depth in movies. And in our film, the viewers will not just be horrified, they’ll somehow be challenged to think as to how faith healing has already been part of the our culture,” Vilma narrated.