Menu
Search
LionhearTV introduces a monthly digital magazine called DigiMag, which will be available only through the LionhearTV.net. DigiMag is a blog-feature type introducing some of the biggest and brightest star today and we just coined it as Digital Magazine because of the cover. I hope you’ll like it guys! 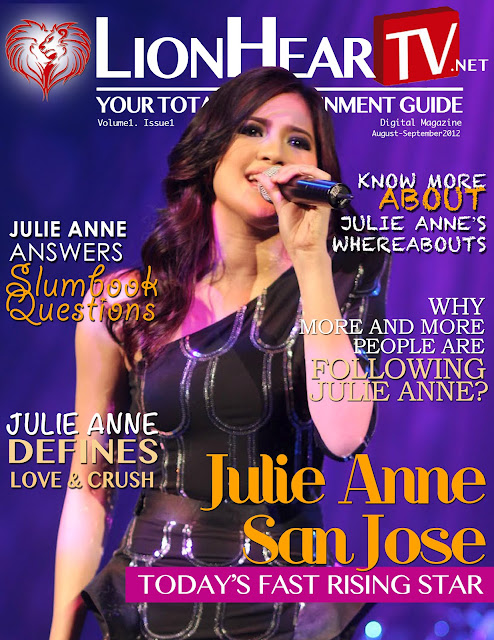 Inside the maiden issue of LionhearTV.net Digital Magazine, Julie Anne San Jose will share the life of being a star on an off camera; she will also reveal her ‘love;’ and she will answer some of the most intriguing and controversial ‘slumbook’ questions and more.

Julie Anne started out in “Popstar Kids” as one of the finalists, and later on became a member of the group Sugarpop. Today, Julie Anne has grown up from this sweet little girl to a graceful young lady whose voice captivates the hearts of her fans, and she continues to rise as one of the most promising performers in the industry today.

LionhearTV.net is a 24/7 information blogsite about the latest news and events all over the metro. Now on its fifth year, LionhearTV introduces LionhearTV.net Digital Magazine featuring the hottest stars today.