Menu
Search
Set in a too-near future, a man searches for a meaningful connection as humanity’s last days are at hand, in Focus Features’ new comedy “Seeking a Friend for the End of the World.”

Can he find his greatest love at the worst possible time? 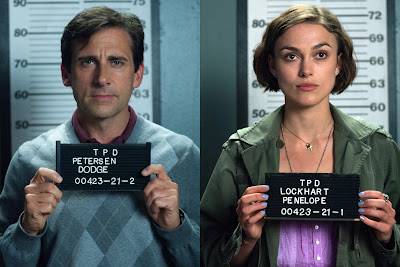 Dodge (Steve Carell) is a man who has always played by the rules of life, while his neighbor Penny (Academy Award nominee Keira Knightley) is an extroverted woman who hasn’t. From these opposite perspectives, both initially choose to navigate the impending end of the world with blinders on. Dodge declines joining his friends in increasingly reckless behavior, while Penny fixates on her relationship issues with a self-absorbed musician.

The two misfits meet first when Penny has a rough night and then again when she belatedly delivers Dodge a lost letter. That letter could alter Dodge’s future; it’s from his high-school sweetheart Olivia, the love of his life. When a riot breaks out around their apartment building, Dodge realizes that he must seek Olivia out before it’s too late while Penny makes the decision to spend her last days with family in England. Seizing the moment, Dodge promises to help Penny reach her family if she will provide transport for the two of them in her car immediately. She agrees, and they escape.

On the road together, the unlikely traveling companions’ respective personal journeys accelerate, and their outlooks – if not the world’s – brighten.

We’ve all imagined the end of the world – along with the attendant floods, fires, earthquakes, pandemic viruses, and the asteroid hurtling towards Earth which will be destroyed at the last possible moment by human intervention of epic proportions. That is not the end of the world as Lorene Scafaria sees it.

In writing her feature directorial debut “Seeking a Friend for the End of the World,” Scafaria was more intrigued by what could happen to ordinary people – and how they would interact with each other – in the days preceding The Event.

Scafaria found herself casting a cockeyed glance at “apocalyptic tradition.” She notes, “I had a small obsession with ‘the end is near,’ and a larger obsession with love. So it became a fun challenge to see what would happen when worlds collide – so to speak. I figured I would keep the screenplay at a very human level in scope and tell a story of relationships; what people would do, and how a person with feelings towards another person would be affected.”

The writer/director didn’t necessarily want to make “a ‘road movie.’ I kept trying not to write it as that, though eventually I gave in and started to embrace the concept a little more – but I keep halting the lead characters’ road trip because of basic things like gas. They find themselves in some pickles along their route.”
A couple of drafts were written, but work stopped and Scafaria’s perspective changed once her father fell ill and passed away. She reflects, “I took six months off. Then I came back and rewrote the script, concentrating more on the concept of time – having it, and losing it.”

Ultimately, she offers, “There is a lot in this story that is me; of the two lead characters, I’m more the Penny type, but I have a strong dose of Dodge in me as well.

“Up until this tipping point, these two people have lived their lives very differently. As much as Dodge has avoided life, Penny has been diving in head first. Together, they find they can face the end of the world.”

“Seeking a Friend for the End of the World” will be shown soon exclusively at Ayala Malls Cinemas (Glorietta 4, Greenbelt3 and Trinoma).