Menu
Search
Stripped and Covered, the album includes some of the most memorable 90’s light rock tunes, is Six Part Invention’s first album under Universal Records. 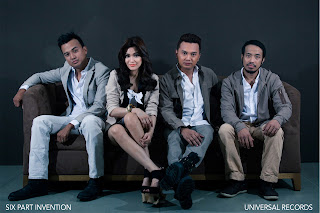 The said album will also be released in four countries – Singapore, Malaysia, Thailand and Indonesia.

Six Part Invention, composed of Rey, Kaye and Tag Cantong, and Andy Dela Cruz, includes some of the well-loved light rock tunes from the 90’s including Def Leppard’s Two Steps Behind, Bad English’s When I See You Smile, White Lion’s You’re All I Need, Europe’s Carrie, Cheap Trick’s The Flame, among others.

“To be part of the Universal Records family is really a dream come true for us,” expresses Rey. “This album celebrates many firsts for us – our debut album for Universal and our first time to take on an album concept like this. Plus, we are so thankful that the album will be available in other territories in Southeast Asia.”

Two Steps Behind, the album’s carrier single, topped the music charts. It was number one on the mymusicstore charts for six consecutive weeks.

“The production of the album is really a labor of love from all of us in the band,” adds Kaye. “I hope this album takes everyone on a romantic musical journey.”