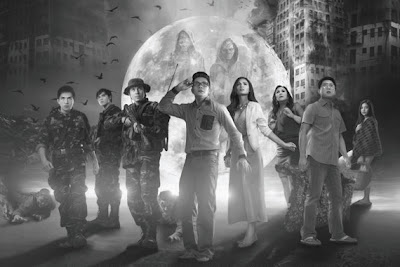 Director Chito S. Roño’s science fiction horror film “Shake, Rattle & Roll 14: The Invasion” is finally hitting television screens as it premieres for the first time on television via Cinema One this Sunday (July 21).

Cousins Myra (Janice de Belen), Donald (Herbert Bautista), Faye (Arlene Mulach) and Benedict (Eri Neeman) are pitted against suspicious occurrences in visiting their late uncle’s house to claim their inheritance in “Pamana”, the first of three stories in “Shake, Rattle & Roll 14: The Invasion”. “Pamana” involves the death of a famous horror writer for comic books who, prior to his demise, left substantial amounts to be inherited by his nieces and nephews. Mysteriously, upon their arrival, a butler greets them and announces that should any one of them follow in the footsteps of their uncle to meet death as well, the inheritance of five million pesos each will be split to be given to the survivors. Aside from this odd statement, they were each given one comic book to hold on to, in memory and in respect to the old man who had passed away. Even stranger, when the clock struck midnight at the compound that the cousins were staying in, the comic books no longer remained inanimate objects.

The second story, “Lost Command” is about members of the Philippine Army Special Unit 21 led by First Lieutenant Bert Garces (Rommel Padilla) and M-Sergeant Martin Barrientos (Dennis Trillo) who are sent on a special mission to look into far from normal occurrences in a remote jungle area of Mindanao. There, he meets the blind Linda (Ella Cruz), whose father had dealt with the sought after enemy. The problem, however, is that they find that they are against beings who have long since been dead and are hungry for human flesh.

In “Unwanted”, Hank (Vhong Navarro) and his girlfriend Kate (Lovi Poe) expect a typical day at the mall while shopping for a present until suddenly, an explosion occurs, destroying the area. Hank finds himself trapped along with some other survivors. Then, they meet their captors—extraterrestrial beings who aim to form a “new world” with their alien race. In what was a turning point for the involvement of special effects in the Philippine film scene, “Unwanted” brings in an out-of-this-world viewing experience, receiving good reviews for the creation of its scenes.

Catch “Shake, Rattle & Roll 14: The Invasion” airing this Sunday (July 21) at 8:00 p.m. on the Philippines’ number one cable channel, Cinema One (SkyCable channel 56). For updates about the program schedule, follow @cinema_one on Twitter and by like its official Facebook page www.facebook.com/Cinema1channel.