Strict safety protocols are prompting local production units to impose drastic adjustments, not just to their filming strategies, but also to plots of ongoing script-based productions.

There have been casualties already － TV series, and unscripted shows that eventually bid farewell in television for good. 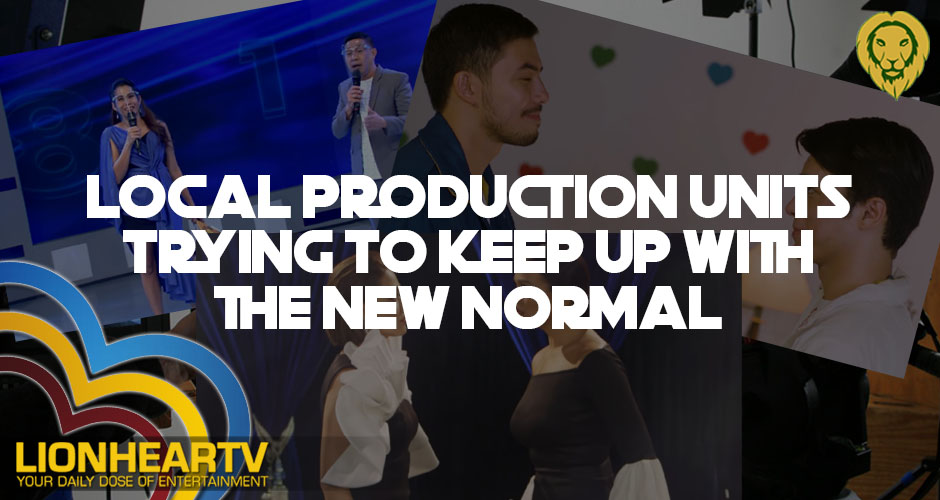 On ABS-CBN, the Liza Soberano and Enrique Gil-starrer ‘Make It With You’, the family pre-primetime drama, ‘Pamilya Ko’, and the Korina Sanchez-headlined magazine show, Rated K, have bid goodbye.

Non-scripted entertainment like game shows and talk shows were hit hard as most of them are aired live, and thus need to enforce more stern real-time measures. Adjustments are evident in ‘Eat Bulaga’ and ‘It’s Showtime’. Hosts and game participants are required to go on a 14-day quarantine period before appearing on camera, and safety and health protocols are strictly observed in the set. Prior to this move, both networks opted to air past episodes to make time for them to prepare the set and the production crew, hosts, and participants of the show.

Taped shows like talk shows are also adapting to the demands of the new normal in content production, with hosts and guests required to wear protective shields and to maintain physical distancing. But perhaps, the biggest change that this pandemic has brought to live production, is that no audience is accommodated inside the studio.

“We’re used to performing in front of a live audience, for ten years,” It’s Showtime host Vhong Navarro said in a TV Patrol report. “It helps us forget our woes” he noted. He also cited now that they no longer hear the laughter of the live studio audience, it’s hard to tell if they are really able to entertain people.

“We would like to be the network of the new normal. That’s how we would like to brand ourselves. We are in a very interesting position to provide a different kind of entertainment for the audience,” Perci Intalan, TV5’s head of programming declared.

The ones most hurt in the industry, however, are those involved in the production of scripted entertainment, like soap operas and movies. As ongoing shows permanently canceled filming, those that decide to continue have to confront drastic changes in their manner of shooting scenes. But perhaps, the bluntest of these changes, are received by scriptwriters, who are forced to employ necessary changes to the original plots, as a response to the lack of resources, and restricted choices of shooting locations. Since public transport is halted, and any other form of mobilization is restricted by existing safety protocols, production units are facing bigger hurdles in shifting between filming locations with ease.

No physical contact is also enforced on sets. This means that no more kissing and any other intimate scenes are allowed between actors. However, such may not be the total case for some ABS-CBN shows that are now using the network’s sound stages in Bulacan. For Ang Sa Iyo Ay Akin, which shot scenes during the height of the imposition of safety protocols, tricks are employed to make actors look as if they are close to each other, especially in scenes where the characters have to be seen kissing and performing other daring scenes. However, some soap staples like catfights may not be seen on a regular basis like before. Because of these restrictions, showrunners are forced to adapt to the new normal in content production.

“We have to be clever. We have to find ways how to still practice social distancing,” Ang Sa Iyo Ay Akin director F.M. Reyes reveals, sharing how they are forced to institutionalize measures that will enable them to be still in control of how their story unfolds while observing the new guidelines set for the entertainment industry.

In another Kapamilya series, ‘A Soldier’s Heart’ much of the scenes of its new season are filmed in indoor locations, veering away from usual field scenes where characters engage in armed encounters or fistfights.

For actors, restrictions on how many people can be allowed to gather in one place has compelled them to drop personal assistants when going to their set location. Love Thy Woman’s Sunshine Cruz lamented how she has been struggling now that she can no longer bring her make-up artist. “I’m now trying to learn how to do make-up since I am not used to doing it myself,” she confessed during an online mediacon.

The same safety standards are followed by Boys’ Love (BL) drama creators, who try to meet the exploding demands for new content under the emerging romance subgenre. iWant, ABS-CBN’s own streaming app which also creates web dramas continues to produce new offerings amid quarantine protocols. Most plots are in fact written to reflect the ongoing pandemic and lockdown measures enforced in many areas of the country.

GMA-7’s Wowowin has settled holding its live episodes without a live audience. Host Willie Revillame is usually seen alone in the frame, doing phone calls to give away prizes.

GMA News TV, on the other hand, is offering brand new shows that intend to help the Filipino people to navigate through these trying times more easily.

As these measures are expected to persist indefinitely, self-contained productions may become commonplace. Implementation of rigid hygienic measures will ensure the prolonged prohibition of kissing scenes, which means that fans will have to make their imaginations work when their favorite love teams are sharing the same frame. Fans of action dramas like FPJ’s Ang Probinsyano will also have to wait for a while until riveting action set pieces can be again carried out by actors.