QUEZON CITY, PHILIPPINES, October 2020– Get ready to take a trip down memory lane while watching the talked-about hit Filipino musical, “Ang Huling El Bimbo,” which is now streaming in countries outside the Philippines via TFC IPTV and iWantTFC. 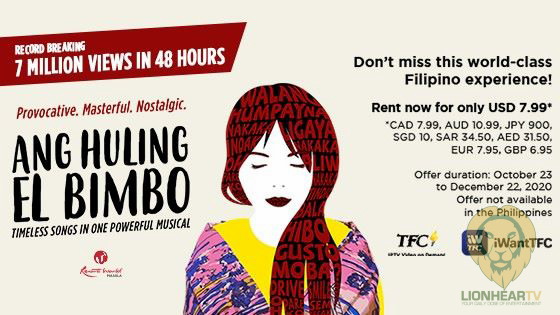 “Ang Huling El Bimbo” is a musical set in the 90s that features some of the hit singles by the iconic original Pilipino music (OPM) band Eraserheads.

It is a story of a group of friends: college students Hector, Emman, and Anthony who meet and become friends with Joy who is working in a food place they are frequenting. They are full of hopes and dreams both for themselves and the people they value until an unfortunate event tests their friendship and changes their lives.

During its Philippine staging, “Ang Huling El Bimbo” received good reviews and one of them is from the Broadway star Lea Salonga who said in her March 2019 column on The Philippine Daily Inquirer: “Truth be told, it doesn’t take being a fan of the Eraserheads, and thus desiring of 1990s nostalgia, to appreciate all that this fantastic musical is.”

On the other hand, Iñigo De Paula said in his review published on Rappler in March 2019: “It takes our appreciation for a pre-existing collection of music, and uses storytelling to make us examine them. We come for the songs, but it’s the questions that will stick.”

iWantTFC subscribers can also watch two versions of “Ang Huling El Bimbo,” that features two different sets of actors, by paying only for a price of one which you may rent via iWantTFC online (iwanttfc.com). The musical is only available for subscribers outside the Philippines.