Actors: Ian Veneracion, Dimples Romana, Gloria Diaz, Ariel Ureta, Sue Ramirez, Louise Abuel, Adrian Lindagan
Format: Weekly Sitcom
Premise: A former basketball MVP returns to the Philippines, 15 years after leaving the country due to a scandal he got involved in, only to be found by three young people all claiming to be his child
Time slot: Every Saturdays, 5 PM 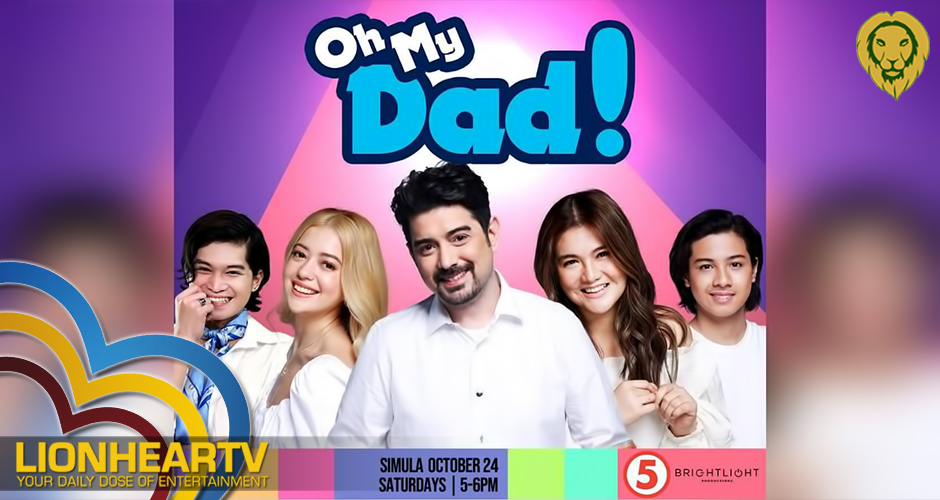 Oh My Dad’s take on family, relationships, and responsibilities are both hilarious and heartwarming, at the same time.

Brightlight Productions continues to fill TV5’s line up with diverse programming. Following the premieres of Sunday Noontime Live (SNL), a musical variety show, and I Got You, a weekly romantic-drama series, the Albee Benitez-owned production company, debuts its first sitcom with TV5, ‘Oh My Dad’, which stars one of the country’s top daddy heartthrobs (in his 40s!).

Oh My Dad follows Matthew ‘Matmat’ Balderama (Ian Veneracion), a former basketball MVP who comes home to the Philippines from the US after 15 years of evading the scandal he caused during the height of his popularity. Confident he never lost his fame, Matmat hopes to be greeted again by the limelight, which he was, except by the same controversy he struggled to free himself from for one and a half-decade. And more to his surprise, he finds out that he is actually a father to three children, who upon learning his homecoming, comes knocking on his door, asking him to take them in. He is now forced to balance his time between his three children, a brewing romance with an old acquaintance who knows him to be a womanizer, and his quest to regain his dimmed showbiz career.

Veneracion who first took comedy roles when he was still a child star, ventures into comedy again, but this time, in a mature role that showcases his being a bachelor and a family man. As a man in his 40s with a long history of not taking things seriously, Matmat is faced with new responsibilities that require emotional attention. And while the narrative takes this complication in a lighthearted manner, it never forgets to tackle it with humor, resulting in heartwarming moments that are filled with both chuckles and heart-pinching beats.

Among the delightful surprises in ‘Oh My Dad’, are characters Lenlen (Sue Ramirez) whose hilariously cute Ilonggo accent is on point, and the unlikely love team played by veteran actors, Gloria Diaz and Ariel Ureta. The show is set to explore the dynamics of family, parenthood, and siblings. Audiences will also giggle about the development of Dimples Romana’s and Ian Veneracion’s characters, as they embark on a mid-life romance amidst their respective responsibilities.

Oh My Dad! Airs every Saturday on TV5.

Watch ‘Oh My Dad’s’ trailer below: