Premise: A player is given 1000 heartbeats and tries to accumulate as much money as possible through seven uniquely-formatted rounds. He must not run out of heartbeats to reach the jackpot round. 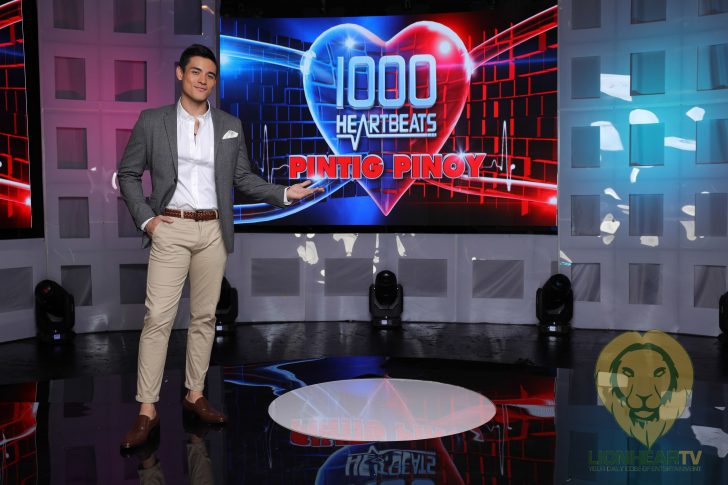 The ultimate key to win TV5’s newest game show, 1000 Heartbeats: Pintig Pinoy may be keeping their heart rate as smooth and steady as possible, but brains and wits may also undermine the seven grueling and mind-challenging rounds.

In 1000 Heartbeats: Pintig Pinoy—which is the local version of the hit UK game show, 1000 Heartbeats with Xian Lim as the dashing game master. His warmth and friendly banter keep the new game of brains “cool”.

For someone who is presenting a game show, for the first time—he is more known for doing non-scripted entertainment shows, like beauty pageants, and similar events—Lim can pretty pass the show’s challenges with a cool kind of hosting.

The game has some of the most interesting gameplays ever adapted by local television. Quiz shows are naturally embedded with thrill and surprise, but here, the excitement is even elevated to a higher level with innovative and breathtaking twists.

Here, the player tries to make it through the game rounds while a heart rate counter is attached to his or her chest.

In the beginning, he is given 1000 heartbeats which must not run out until he gets the chance to play the final round.

His time for each round is measured through his heartbeats, which would be deducted from his total 1,000 heartbeat allowance. Also, a wrong answer constitutes 25 heartbeats and must also be deducted. In each round, the player is given the chance to discontinue the round—say he could no longer provide the answers demanded.

If that is the case, another question or set of questions will be given in order for the player to complete the number of correct answers required. The consequence of this, however, is that a total of 100 heartbeats will be deducted as a penalty. He proceeds to the next higher round once the demanded number of answers is met.

The game, however, gets canceled should the player flatlines with zero-heartbeat.

One interesting twist of the game is the player can go home with a guaranteed cash prize, by choosing to play the “cashout” round. Here the player bypasses the succeeding rounds to get the money he accumulated from all the previous rounds. Should he complete the answers required by the round, he takes home the total cash prize he accumulated.

For its pilot episode, 1000 Heartbeats: Pintig Pinoy is an exciting game show that offers an interesting and outstanding format. It has elegance and some depth, too, that most other game shows lack. It also marks Lim’s victorious foray into hosting game shows.

Chad Kinis and his comedic antics, however, can be taken out of the show, and it will still go fine.

1000 Heartbeats: Pintig Pinoy airs on TV5 every Saturday. Watch the trailer below: