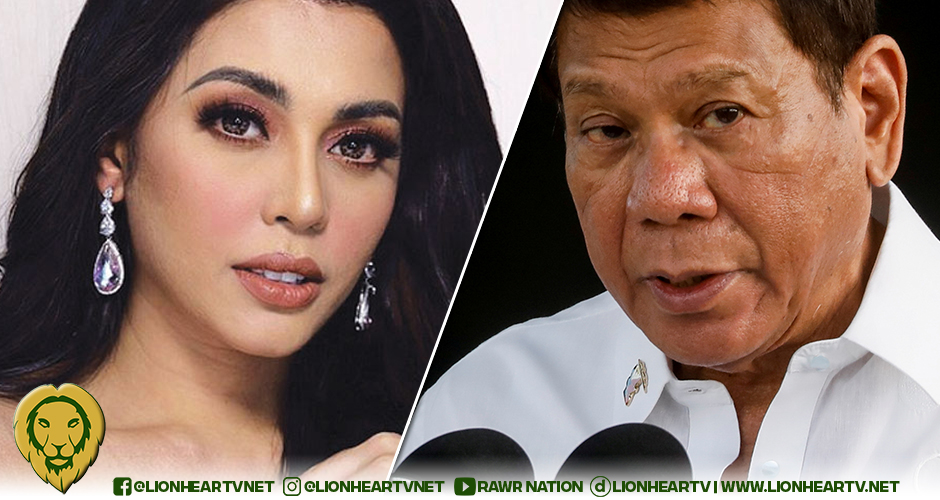 However, as she made noise online and defended Mateo from critics, Netizens rekindled the issue about her being a DDS.

A netizen asked MJ about her feelings now that her fellow DDS are attacking Mateo. The beauty queen inquired why the label of being a DDS.

The accusation against Lastimosa being a DDS stemmed from a photo with President Duterte when she visited the Palace.

Apart from that, from a now-deleted tweet in 2016, she also expressed her admiration for Duterte. She assured the President that she stands beside him until the end.

“DUTERTE TILL THE END sorry, I worked for the guy and admired his ideals since then.”

When Netizens asked for an update regarding that, she then clarified that she just got invited to eat there. She also wished to see the Palace thus she accepted the invitation.

The Filipino-Arabian fashion model, actress, television presenter, and beauty pageant titleholder quipped that she was ‘scammed’ due to the food served to them.

During Mateo’s stint in Miss Universe, she got attacked by DDS for defending the PH bet.

When asked if she is still a DDS after that, she said that she’s already tired of these people.

She was born in North Cotabato, but she finished her schooling in Davao City, Duterte’s hometown.

Lastimosa was crowned as Mutya ng Dabaw in 2008 then represented the city in Reyna ng Aliwan in the same year, where she also won the top crown.

She represented the Philippines at the 2014 Miss Universe, where she finished in the Top 10 finalists. Recently, she had a reunion with her MU2014 sisters in Florida.

As you all know our batch mu2014 is the most solid w our annual reunions, since pandemic postponed our 2020 plans I’m just glad to be able to catch up a few of them here in Florida where we actually competed in jan 2015 ❤️👑✨ #utg #mu2014 #sisters pic.twitter.com/KH22mCYXVg