PHILIPPINES, MAY 2021 – Culinary genius Gordon Ramsay hits the road again in the third season of GORDON RAMSAY: UNCHARTED, premiering on National Geographic on Tuesday, 1 June at 9am with an evening primetime repeat at 10pm. Viewers can expect an all-new lineup of episodes from the multi-Michelin star chef and Ironman athlete, as he embarks on a thrilling adventure around the globe in pursuit of culinary excellence. 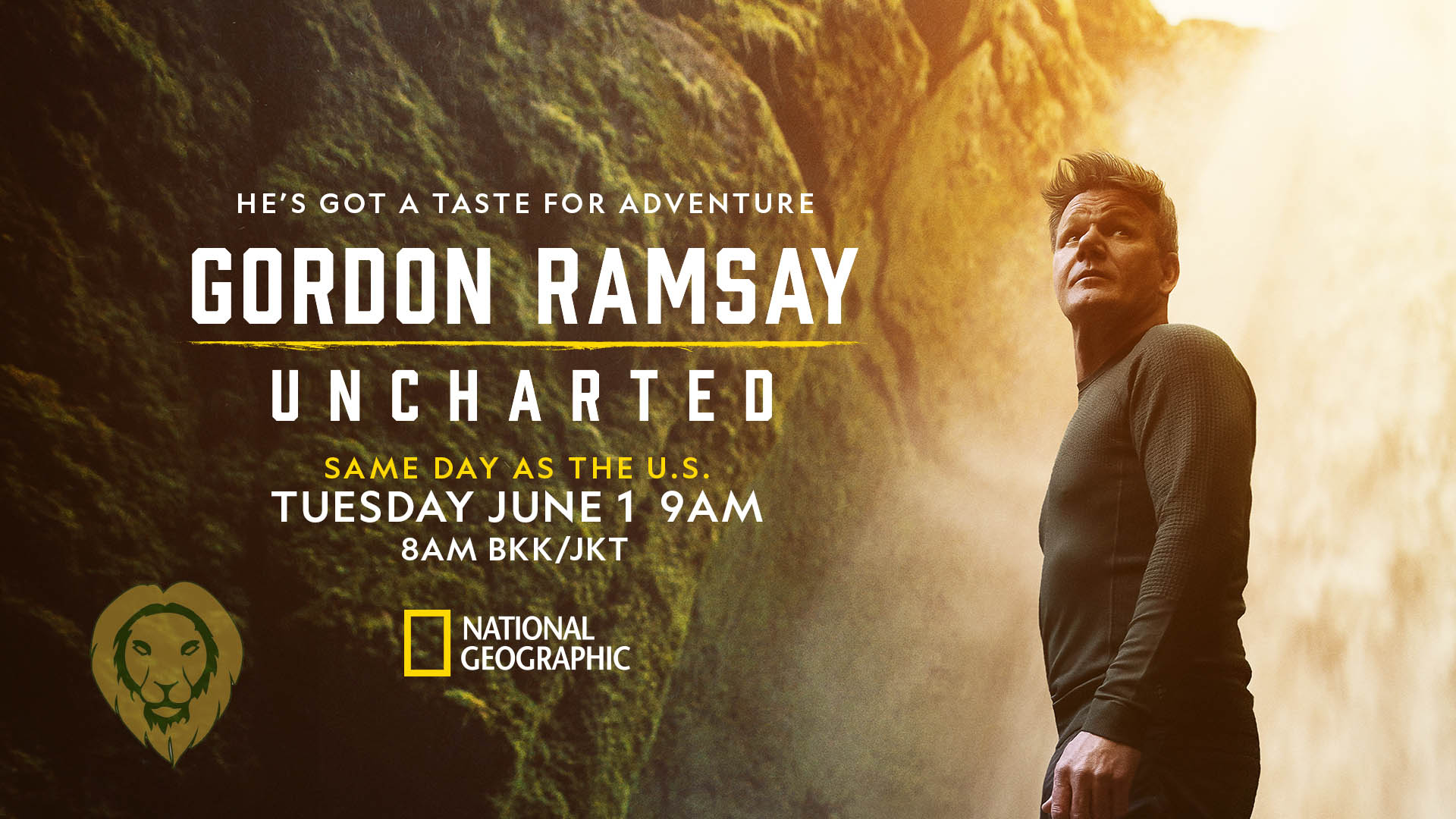 This season, get ready to go off the grid (and off the recipe) as Ramsay travels through Portugal, Croatia, Mexico, Texas, Maine, Puerto Rico, Iceland and America’s Smoky Mountains exploring global cuisines and unique culinary customs. From scaling mountains, battling 3-metre waves, braving frigid temperatures and bushwhacking his way through the backcountry to forage some of the finest ingredients in the world, Ramsay risks life and limb in his biggest and boldest mission yet in order to achieve edible excellence.

“During these unprecedented times, UNCHARTED provides an exciting escape to explore the world safely from home, and inspiration to try new flavours and cooking techniques from the food experts I meet along my journey,” said Ramsay. “The world is a massive place, full of diversity and history, and we are just starting to dig into the boldest flavours the planet has to offer.”

Under the guidance of local experts and food legends he meets along the way, Ramsay partakes in culinary customs and learns about the delicacies and fresh flavours unique to each region. Every ingredient he harvests, dish he tastes, and person he meets inspires him to create a recipe from scratch to represent the heart of that culture. Each episode concludes with Ramsay challenging himself to a final cookout with a local food legend, preparing a meal together for locals.

Some of the adventures — culinary and otherwise — that Ramsay experiences this season include:

– Risking life and limb by participating in a traditional bull race in a remote West Sumatran rice paddy field;
– Braving Tasmania’s stormy waters to hose-dive among the rocks for giant spiny lobsters;
– Leaping from a helicopter into high waves to harvest mussels along the South African coast;
– Exploring a bat-infested Indonesian cave system in search of giant prawns;
– Racing a four-wheeler through Louisiana’s dangerously muddy back roads to forage for fresh greens and hunt for bullfrogs and crawfish;
– Plunging into Norway’s frigid waters to uncover the bounty of ingredients found within the fjords;
– And battling strong surf to catch fish using traditional techniques in South India — that is, with a 90-kilogram net out at sea.

Details of all ten episodes are as follows:

Texas Throwdown
Tuesday, 1 June at 9am and 10pm
Gordon Ramsay journeys to the wilds of south central Texas and meets some tough, gritty characters to learn what it means to be from the Lone Star State. He herds cattle with the help of a helicopter, hunts for venomous rattlesnake in the backcountry and goes on a night hunt for invasive and ferocious feral hogs. He will need to dig deep and toughen up if he wants to show the acclaimed James Beard Award-winning chef Justin Yu and a group of locals that he has what it takes to cook his way through their state.

Portugal’s Rugged Coast
Monday, 7 June at 9am and 10pm
Gordon Ramsay explores the rugged landscape of Portugal, where the simple way of life is evident in the country’s incredible cuisine. Gordon chases black pigs across a farm to feed them, braves giant pounding waves for barnacles that cling to the rocky coastline and the open seas to fish for iconic sardines. He will need to roll up his sleeves and bring his A-game in order to beat local chef, Kiko Martins, in an epic feast for the Mayor of Nazaré.

The Maine Ingredient
Monday, 14 June at 9am and 10pm
Gordon Ramsay learns why Maine, United States, is called the “lobster capital of the world.” Along the rugged coastline, he struggles to keep up with a team of lobster fisherwomen, dives for clams, harvests oysters, forages in freezing waters and tests his lumberjack skills. Can he earn the status of a tough Mainer as he tests his culinary skills against local legend chef Melissa Kelly, a two-time James Beard award-winner?

Croatia’s Coastal Adventure
Monday, 21 June at 9am and 10pm
Gordon Ramsay travels to the untouched peninsula of Istria, Croatia, for ingredients that rival the best of Italy in world-class quality. He fights for oxygen as he freedives for local molluscs, risks his pride fishing for rare cuttlefish and chases after goats for cheese and donkeys for milk. He learns the secrets to finding exquisite truffles and making exceptional olive oil before testing his newly found skills against local chef David Skoko.

Lush and Wild Puerto Rico
Monday, 28 June at 9am and 10pm
Gordon Ramsay explores the enchanted island of Puerto Rico, from the bright blue sea to the lush mountains of the interior. Along the way, he learns about Hurricane Maria’s recent devastating toll on the island and how food shortages have prompted locals to push for food independence. On this epic adventure, Gordon goes spearfishing, takes a helicopter ride to an organic coffee plantation, and rappels down a waterfall for delicious river prawns. Throughout his journey, he is hosted by laid back surfer-chef José Enrique, who turns up the gas at the final cook.

The Great Smoky Mountains
Monday, 5 July at 9am and 10pm
Gordon Ramsay is pushed to his limits in America’s Smoky Mountains. In his quest to unearth the region’s culinary secrets, Gordon must rappel down a treacherous waterfall, kayak through raging rapids, and trek deep into the forest, attempting to find the most delicious ingredients in this magnificent mountain range. His culinary rival at the big cook is chef William Dissen, named one of America’s “Most Sustainable Chefs”, who knows these mountains, rivers and forests like the back of his hand.

Incredible Iceland
Monday, 12 July at 9am and 10pm
Gordon Ramsay heads to the land of fire and ice during the Icelandic summer to learn secret cooking techniques utilising the volcanic landscape. He fishes in a glacial river for wild salmon and cooks bread in geothermally heated soil before heading north to the sparsely populated Westfjords. After sampling fermented shark and diving for scallops in the freezing fjords, he joins Iceland’s first Michelin-rated chef, Ragnar Eiríksson, for a feast in a rainstorm.

Holy Mole Mexico
Monday, 19 July at 9am and 10pm
Gordon Ramsay discovers the culinary secrets of the country’s legendary Oaxaca region, where mole reigns supreme. In addition to learning to make the chocolate and chili-infused sauce, Gordon must rappel down a cliff in search of delicious butter worms, harvest the honey sacs from burrowing ants and fend off angry wasps in search of their coveted larva. In his effort to measure up to acclaimed Mexico City chef Gabriela Cámara, he also engages in the punishing physical process of harvesting agave plants to make mescal.

Michigan’s Yooper Cuisine
Monday, 26 July at 9am and 10pm
Chef Ramsay dives amongst shipwrecks, helps a local monk, and hunts in the forest to discover the culinary secrets of Michigan’s Upper Peninsula.

Finland’s Midnight Sun
Monday, 2 August at 9am and 10pm
Gordon explores the dense woods, freshwater rivers and muddy swamps of Lapland in northern Finland, foraging for an abundance of summer ingredients.