Level-up the weekend vibes with double-header birthday treats from Janine Gutierrez and Ronnie Alonte, plus more world-class acts from your favorite Kapamilya idols in this one-of-a-kind afternoon party live this Sunday (October 24) on “ASAP Natin ‘To” on Kapamilya Channel, A2Z, and TV5.

Celebrating her birthday for the very first time on the ASAP stage is Janine Gutierrez, as she treats her fans with a sweet musical treat. The birthday bash continues with an exhilarating dance number from Kapamilya heartthrob Ronnie Alonte.

Make way for a TikTok sing-and-dance treat from your “ASAP Natin ‘To” family, including Edward Barber, Joao Constancia, Sam Concepcion, iDolls, and many more. Then, groove to the trending hits of today with Maymay Entrata, Darren, AC Bonifacio, and ASAP’s dance royalty Kim Chiu together with dancing delivery riders Jomak Peladra, Lloyd Corsino, and Neil Alferez in this week’s “ASAP Discoveries.”

Get ready for a series of spectacular vocal showdowns from the brightest singers today, including a Janet Jackson tribute from divas Zsa Zsa Padilla, Morissette, Nina, and Regine Velasquez; and another “10Q” treat from Angeline Quinto alongside ASAP’s new breed of singers Diego Gutierrez, Sam Cruz, and Angela Ken.

Plus, be inspired by a moving performance from Gary Valenciano together with Erik Santos, Jed Madela, Nyoy Volante, Jason Dy, Kyla, Janine Berdin, Sheena Belarmino, Lara Maigue, Lian Kyla, Anthony Castillo, and Reiven Umali as they sing their hearts out to a new Jubilee song in time for the 500th anniversary of Christianity in the country. 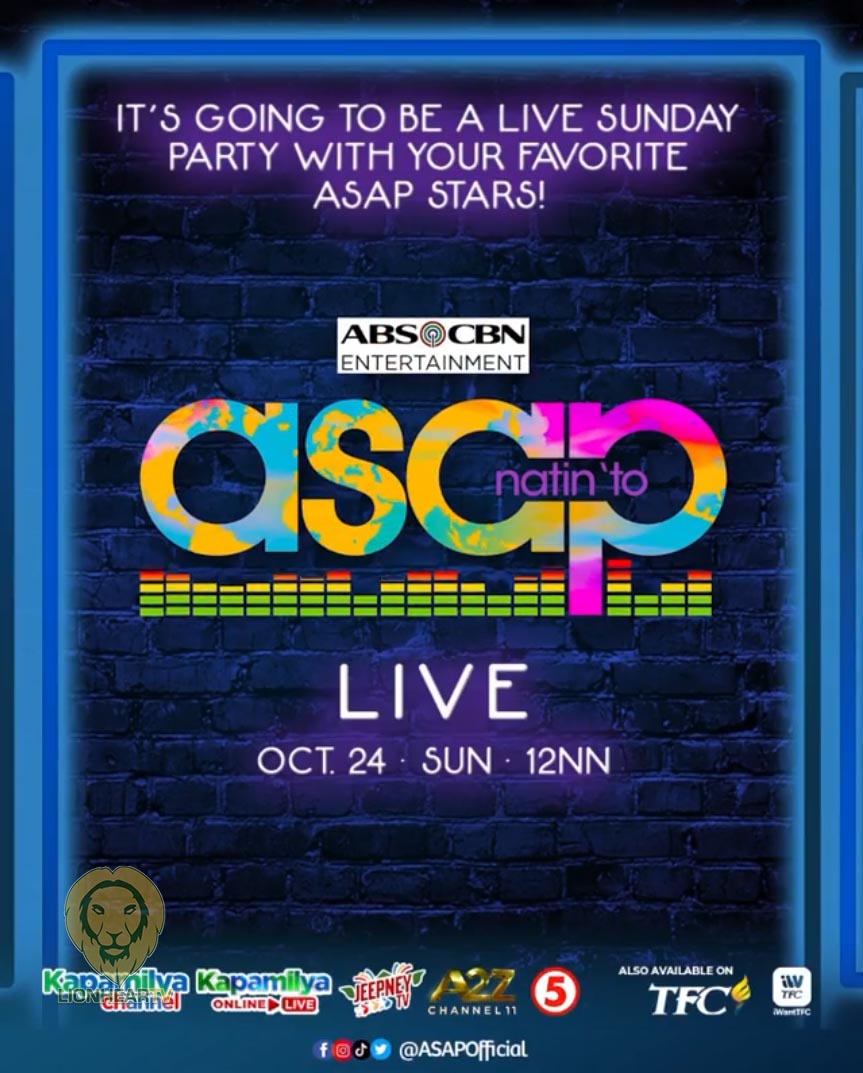 It’s a weekend party you shouldn’t miss from the country’s longest-running musical variety show, “ASAP Natin ‘To,” live this Sunday at 12 NN on local TV via Kapamilya Channel, Jeepney TV, A2Z, and TV5, online through Kapamilya Online Live and iWantTFC, and worldwide via TFC.

Viewers who use any digital TV box at home, such as the TVplus box, only need to rescan their device to watch “ASAP Natin ‘To” on TV5 and A2Z.